Oh Vienna!  Vienna was one of my mom’s favorite places (alongside Nice and Portofino) because it reminded her greatly of Paris, but on a smaller scale.  Much more manageable!  I enjoyed Vienna too, but I enjoy scenic views the most and Vienna didn’t have too much to offer in terms of that.

We found our hotel  fairly easily and were quite impressed!  I got a great bang for my buck!  While our room wasn’t ready, we cleaned up a bit in the restroom, then headed out to explore.  First, we took the metro and then a relatively long bus ride up to Augarten Park, just outside the city, for the best view of Vienna and the Danube River valley.  Then we headed back into the city to start ticking things off of my checklist. 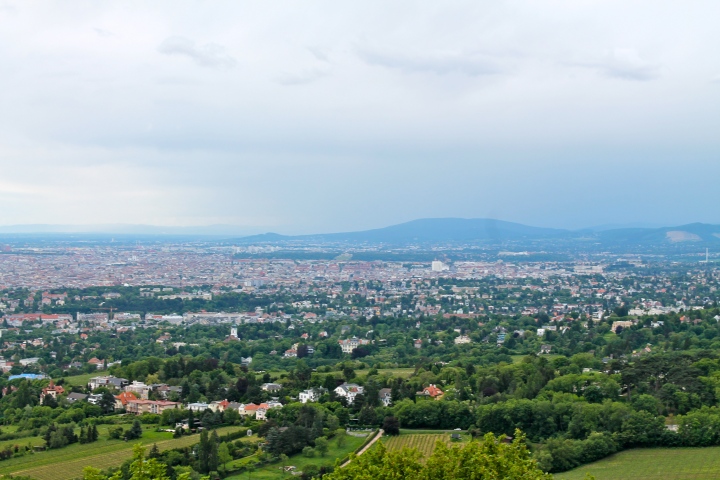 We began first with the cathedral, which was decorated for an Austrian Catholic holiday, which I sadly can’t remember the name of.  Multi-colored, see-through drapes hung from all of the stained glass windows, giving the cathedral the coolest techno-colored look inside!  It was beautiful!  We spent a fair amount of time taking some pictures inside. 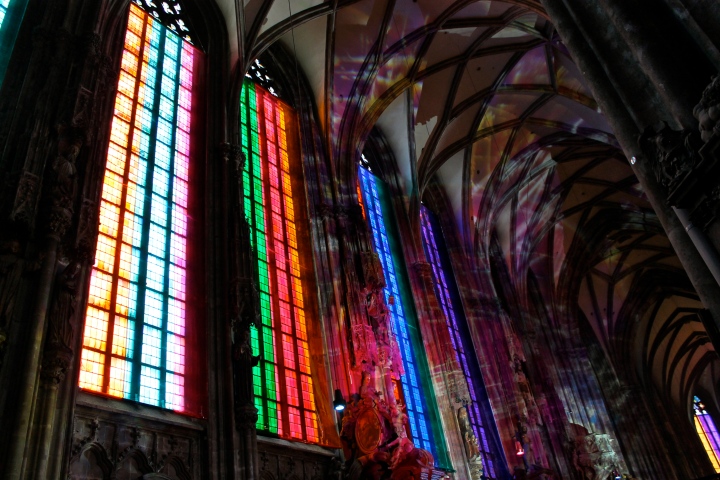 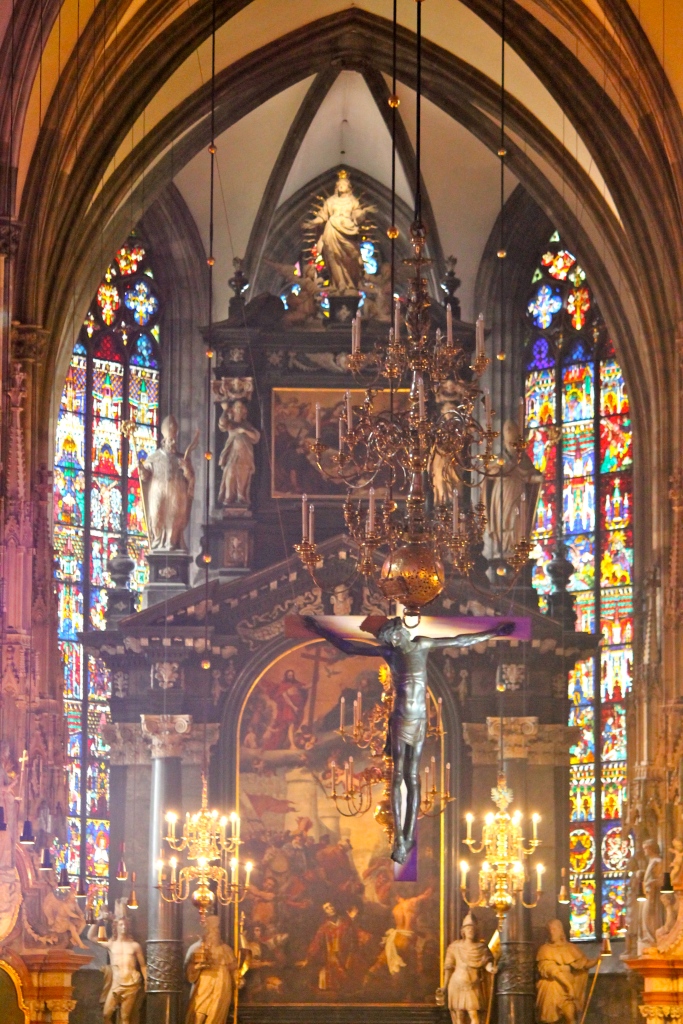 Right outside the church, there was a Manner candy shop, which makes the famous wafer cookies.  We stocked up on these, before browsing the crafts market surrounding the cathedral.  We grabbed our first Bavarian bratwurst of the trip for lunch here! 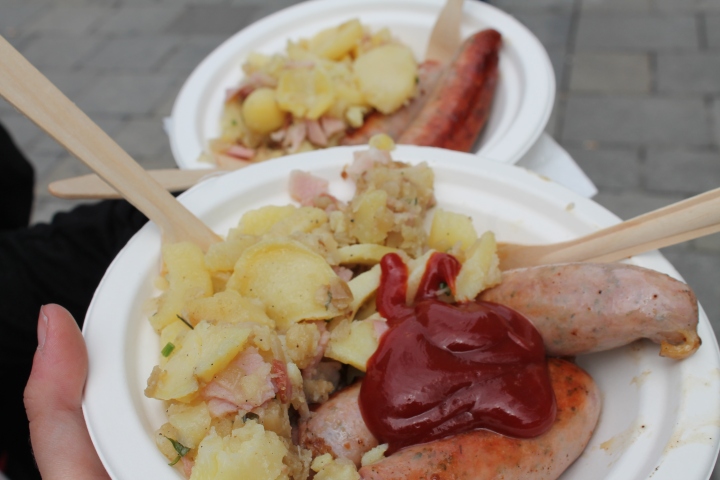 Then we headed through the plaza area to St. Peter’s Church, nearby, where I was excited to find alters for St. Michael, St. Anthony & St. Barbara—I didn’t know my dad and his siblings were all named after saints!  Fortunately, my mom knew this and told me, so I took pictures of them all.  It was cool to find my dad & his brother & sister all hanging out in one church 🙂 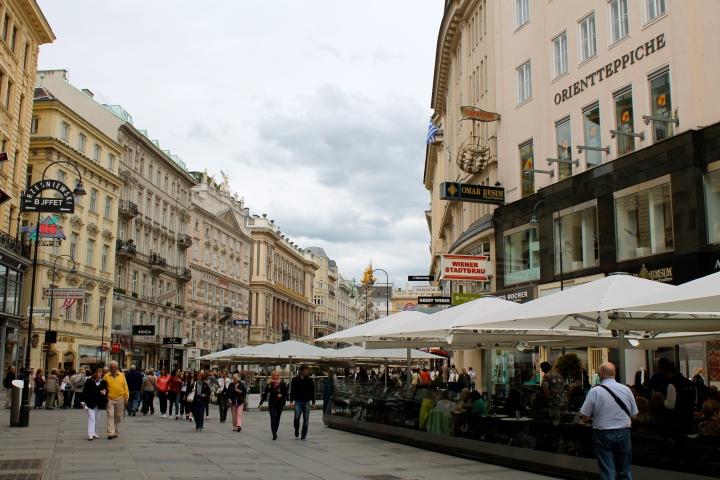 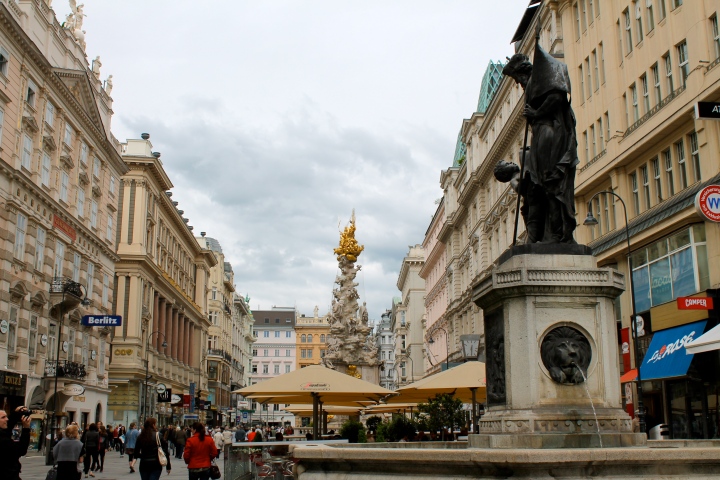 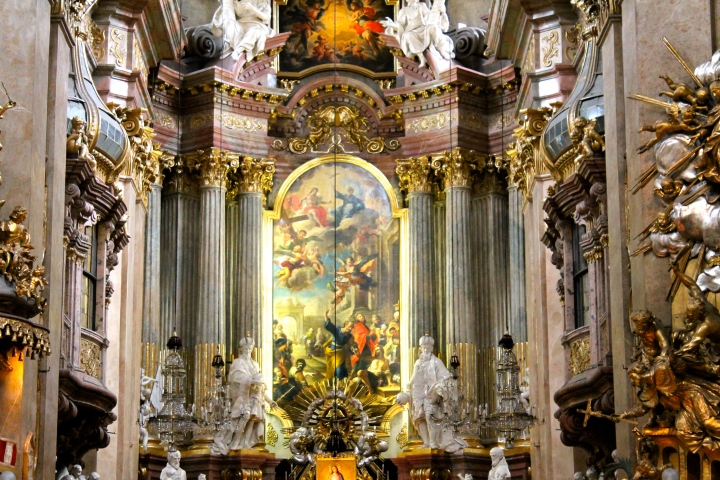 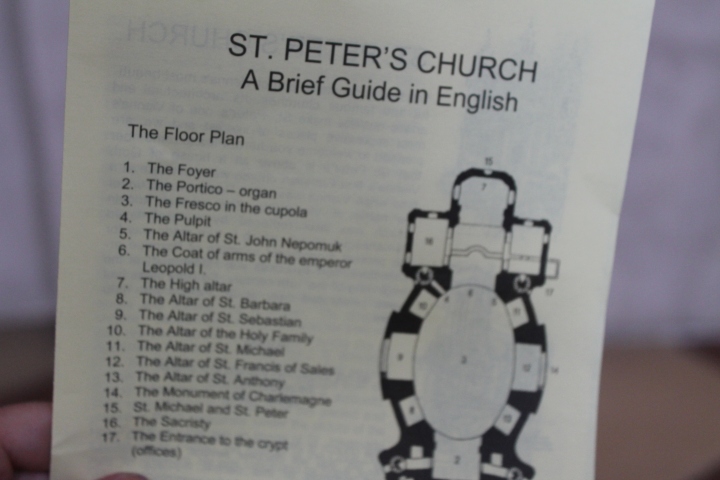 Afterward we headed up toward Hofburg Palace & the Spanish Riding School.  After scoping out the scene there for a bit, it was finally time to head back to our hotel and get the keys to our room! 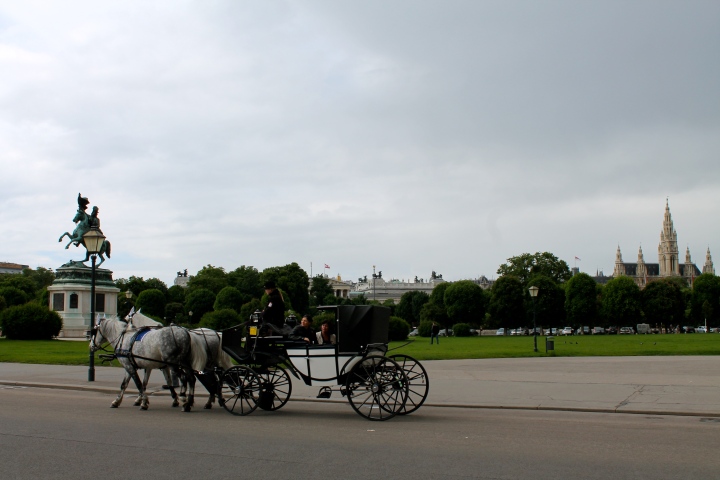 After showering, we headed out to Belvedere Palace.  Belvedere was very pretty with extensive, impressive gardens, and we enjoyed walking through them.  We met two girls from Russia who were kind enough to take our photos.  I also managed to capture my mom in her infamous “Yoga at the Louvre” picture-taking pose.

We walked through Schwarzenburg Place before heading back through the Museum Quarter to the government-buildings part of the city (is that a descriptive term?).  Along the way, we stopped at Beethoven’s old house and were super sad to see it had been graffiti-ed.   My mom really enjoyed seeing the town hall!  Even though they were setting up for the annual Life Ball (Vienna’s famous charity event for AIDS) and lots of the view was blocked, she couldn’t stop raving about the detail.  It reminded me a ton of Munich’s town hall, which I have always raved about myself. 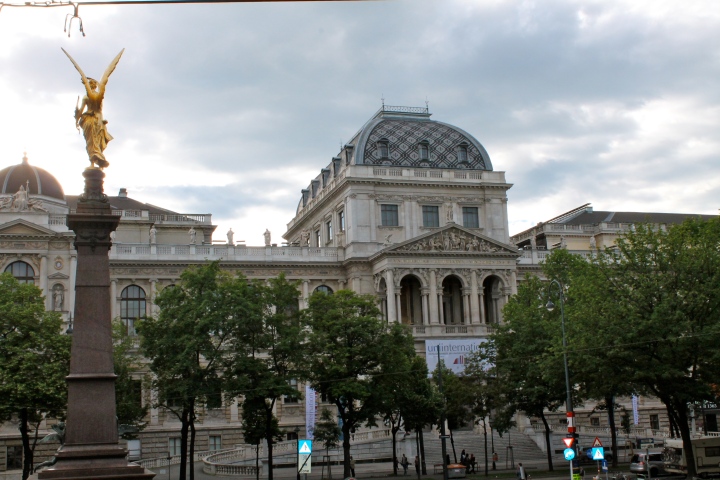 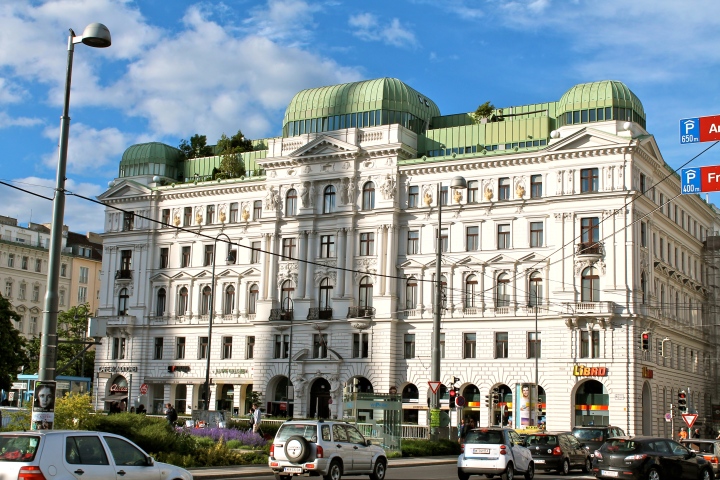 We wandered a bit more around the city ooh-ing and ahh-ing at the exquisite detail on all of the buildings and the numerous parks and green spaces, before heading to dinner.  Then we did our usual “let’s walk around in circles trying to find a ‘better’ restaurant than the one we first saw….before coming back 20 minutes to the first one.”  Fortunately, the first one proved to have nice food and nice company!

It started off rough though.   I was debating between the beef goulash and a chicken & rice dish and decided to play it safe with the chicken.  When they served it to me though, I clearly looked repulsed because my mom immediately switched our plates, without even asking.  (She had ordered the goulash herself.)  I mean, I was expecting chicken breasts….and they gave me like chicken knees (I swear!).  (Okay, maybe it they were little chicken drummies, but they looked like chicken knee caps to me.)  I don’t know how to eat meat that comes on a bone.  I’ve never eat a rib or a chicken wing or anything like that in my entire life, and I wasn’t about to start in Vienna!  So props to Mom for being a selfless mom and giving me the goulash, which I ate without complaint….even when I hit some parts that were like cow tongue not hamburger, but whatever.  Princess moment over.  It was good for me to try something new that I never would have in the US, and I forgot to mention I had yummy soup as an appetizer and shared a delicious crepe with my mom for dessert, so all-in-all it was a fine meal.

When my mom excused herself to go to the restroom, I of course started talking to the guy sitting next to us.  (I blame my parents for never teaching me stranger danger!)  When she returned, we kept chatting.  He was another solo traveler from London, who had been vacationing annually in Vienna for 30 years!  One of his constants is dinner at the restaurant we were at, which has been around since the early 1900’s, so he confirmed we had chosen a great one!  My mom yet again couldn’t understand a word he was saying because of his British accent, but I had a fine time getting to know him.  After about a half hour of conversation we parted ways.

The next morning we were off to Schonbrunn Palace, Austria’s most visited tourist destination!  Knowing that it might be packed, we headed there early on the metro and arrived before too many crowds came.  However, I think took too long taking pictures and the crowds bombarded us, making the entire tour almost unpleasant.  (It wasn’t the crowds that were annoying, it was the tour guides with their booming voices who made it impossible to hear our own audio guides that really got to me.)  Still, it was fun to learn history that I had never before been exposed to, that of the Austrian royal family.  Overall though, the palace wasn’t entirely impressive.  I felt like churches I have seen and other government buildings are more exquisite.  I am likely just jaded though. 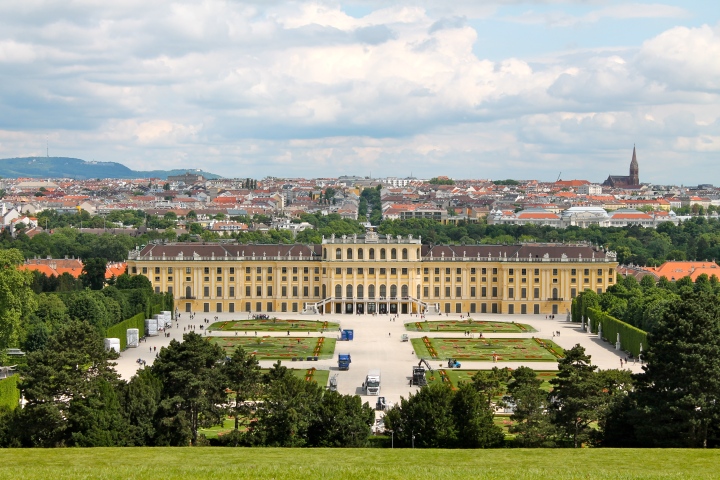 After a half day touring the inside of the palace and the gardens, we headed back into the city to go to the large market.  We toured the food stalls and craft stalls, buying two scarves….before casually running into the older gentleman we had made conversation with the night before!  We were just strolling down the sidewalk on the other side of the city as the restaurant, headed back into the Old Town, when we here “Hello, ladies!” and lo and behold, our friend was sitting, enjoying a coffee, at a random outdoor cafe.  What a truly small world! 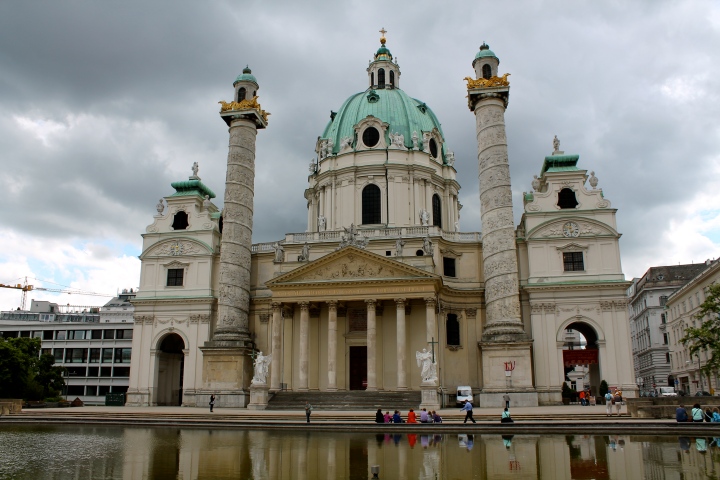 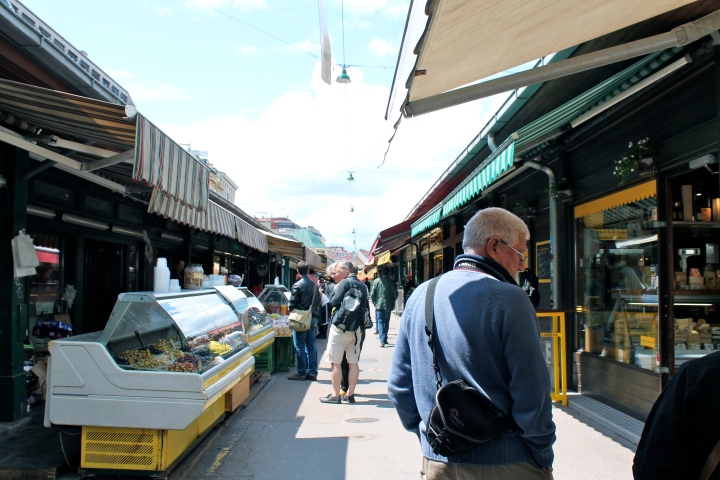 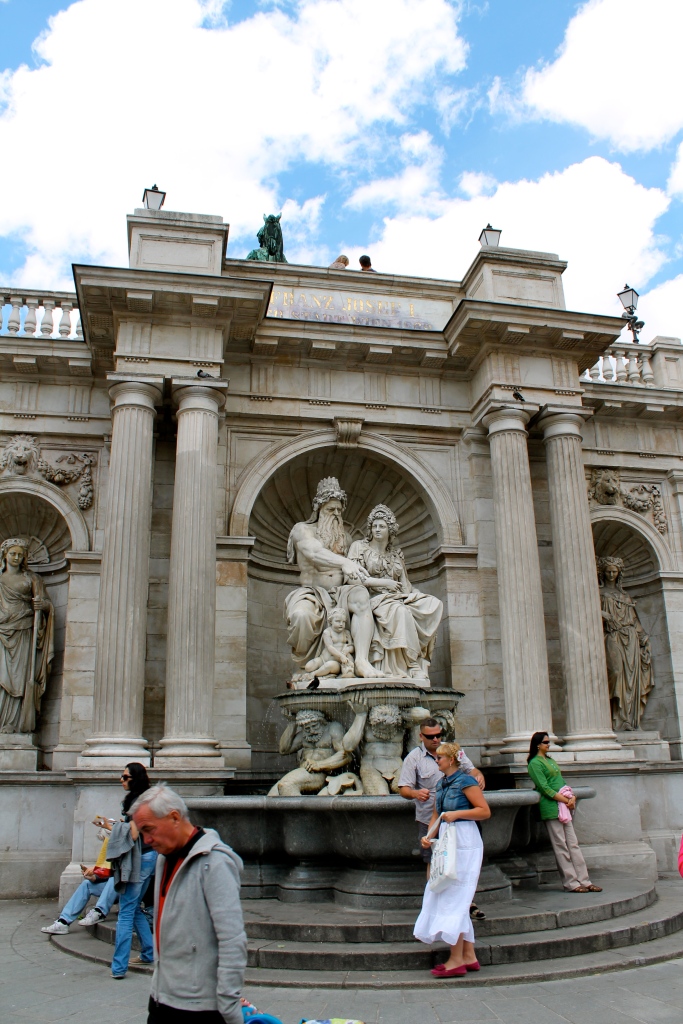 After catching up with him for a few moments, we headed to the Prunksaal of the National Library.  This was my favorite part of Europe!  Pictures will do it no justice, nor will words, but it is basically the most grand, beautiful, detailed library I have ever seen, filled with thousands of old leather-bound books.  The wood carvings and murals are breath-taking and the whole room takes your breath away.  The entire time I was there, all I could think about was how much my dad would enjoy the Prunksaal, and I was determined to capture its splendor in my photos.  No matter how many pictures I took, I just couldn’t capture it though.  I guess I will just have to take him there sometime!  The Prunksaal is truly Vienna’s best kept secret. 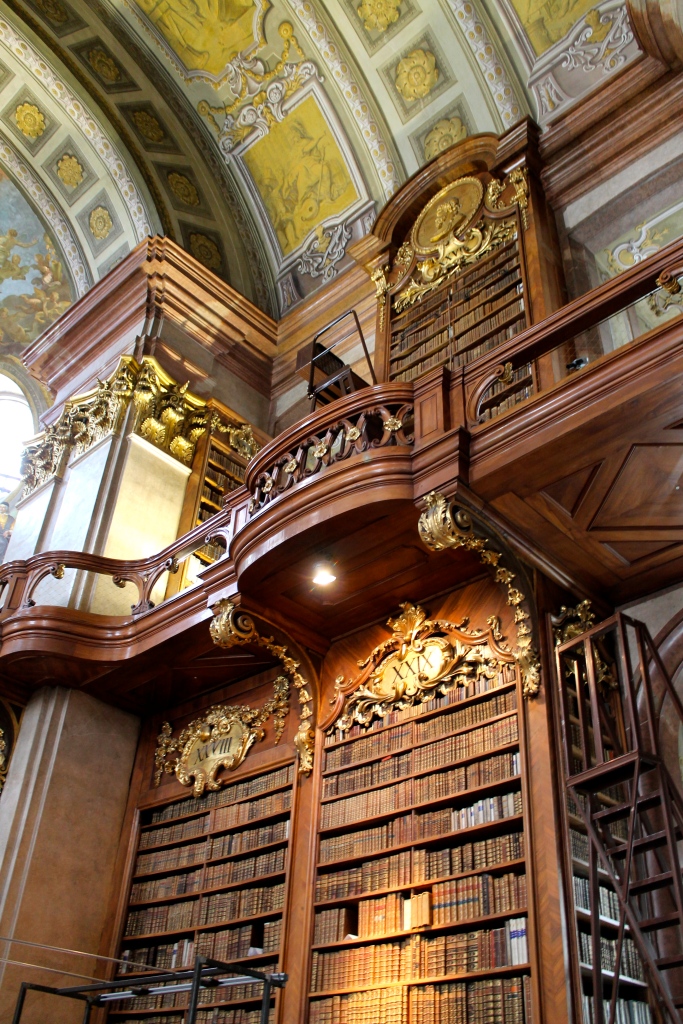 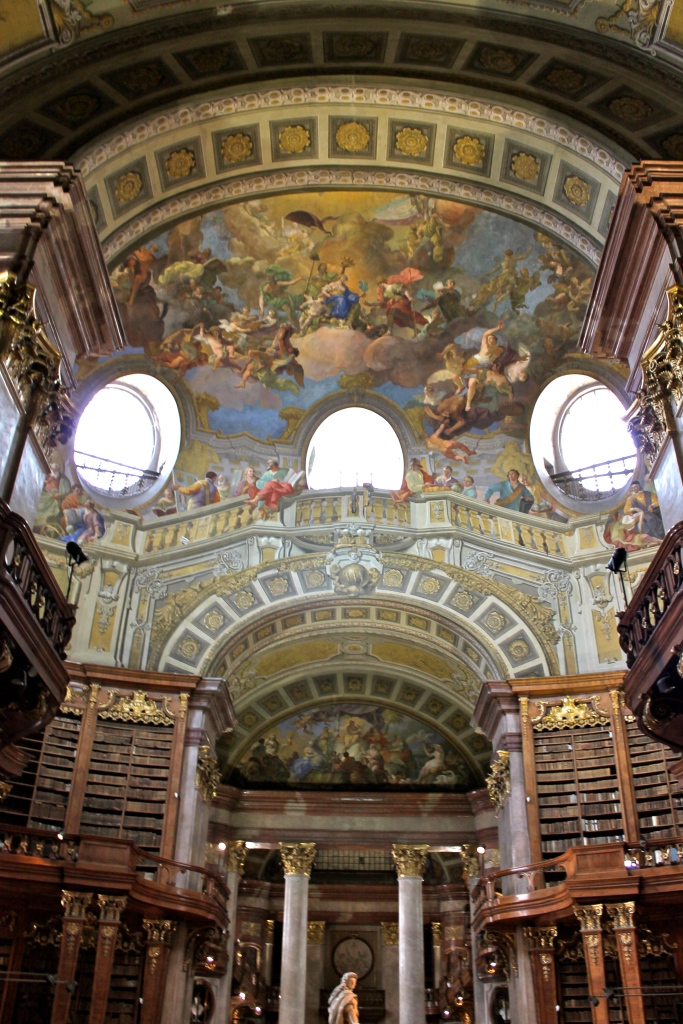 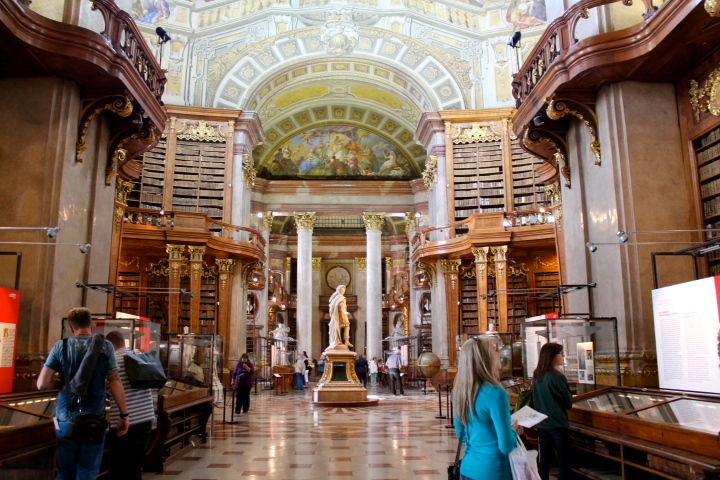 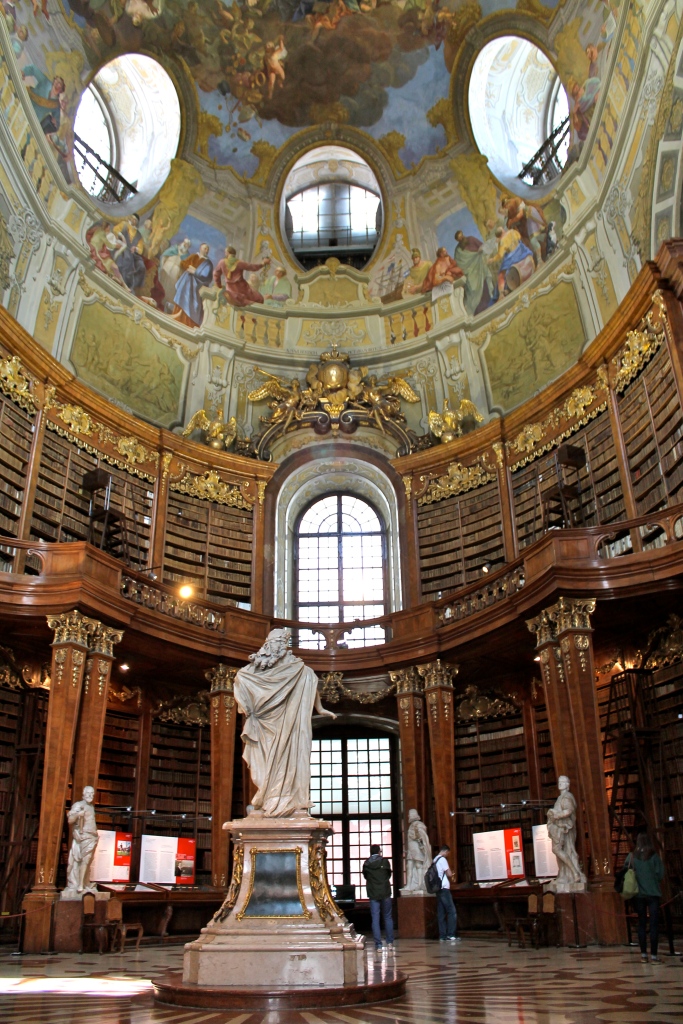 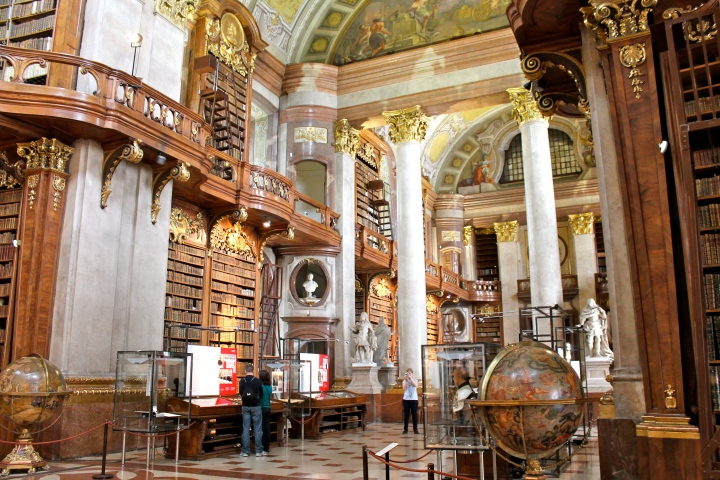 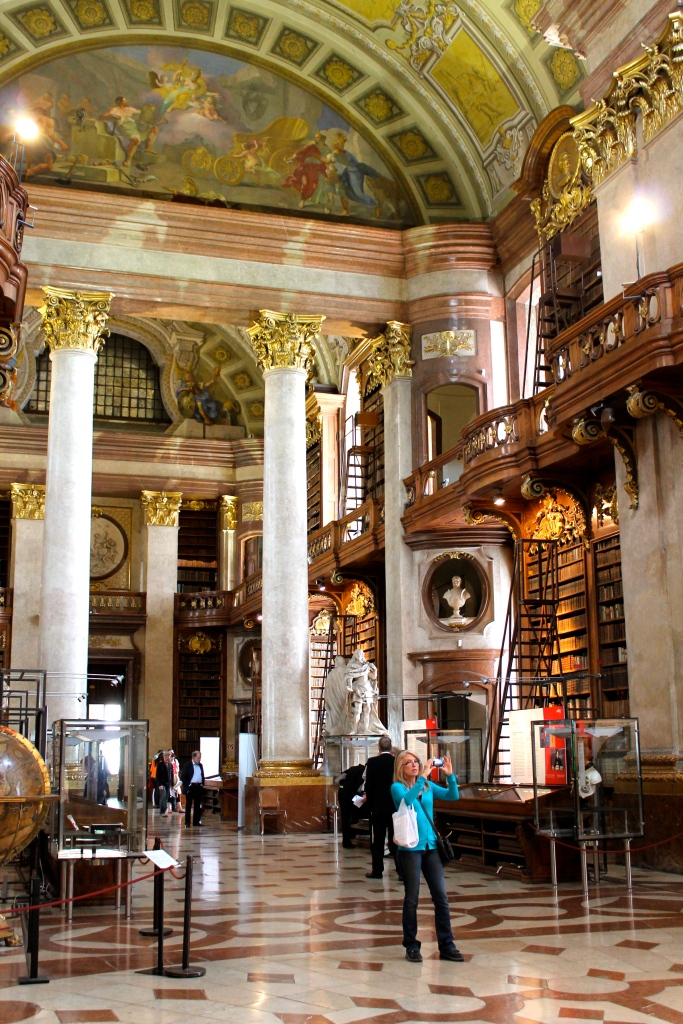 We stopped for one more ice cream cone before we were back in the train station and on our way to Prague!