I can see the end of the finish line!  I’m finally almost done blogging about the trip– just two places left!

While Vienna was one of my mom’s favorite cities, Prague was one of mine.  I absolutely loved the architecture!  Where Vienna’s buildings all stood with a united front, stylistically similar, Prague was a juxtaposition of different eras and styles.  Being an architecture buff, this had my head spinning around in circles as we walked through the streets, taking as many photos as I could!

We arrived late at night and took a cab at breakneck speed, driven by a man who seemed cracked out on something, to our hotel.  Fortunately, since I myself speak roughly 1000 words per minute, I was able to understand his breakneck speed speech, and he ended up giving us a great restaurant suggestion.

Upon arriving at the hotel, we went to bed almost immediately and woke up the next day with a full agenda!

Our hotel was located right next to Municipal House, so from there we wandered down one of Prague’s most famous architectural streets (Na Celetna) to the Old Town Square and took in the cathedrals, cafes, clock tower, and shops.  When I said that Prague was a juxtaposition, it was both figuratively and literally.  It’s main cathedral was plunked down in the middle of things (or, more likely, they plunked things down around the cathedral) and is only partially visible!

Next we headed down Na Karlova (my other favorite street!) and toward the infamous St. Charles Bridge.  The bridge, built in the 1300’s is one of Prague’s most photographed site.  It is lined with 20+ statues (some lucky!) and connects Prague Castle (its own town) with Prague.  I have never seen a bridge like it!  It was so wide & long, but pedestrian-only, and visibly ancient.  The views both ways were magnificent!

After crossing the bridge, we walked up toward Prague Castle and witnessed the Changing of the Guards!  This was completely unplanned and I was SO thrilled to see it!  Of all the castles I have come across so far in my lifetime, I have never been around for a changing of the guards.  We had perfect timing!  Unfortunately we had a terrible view 😦 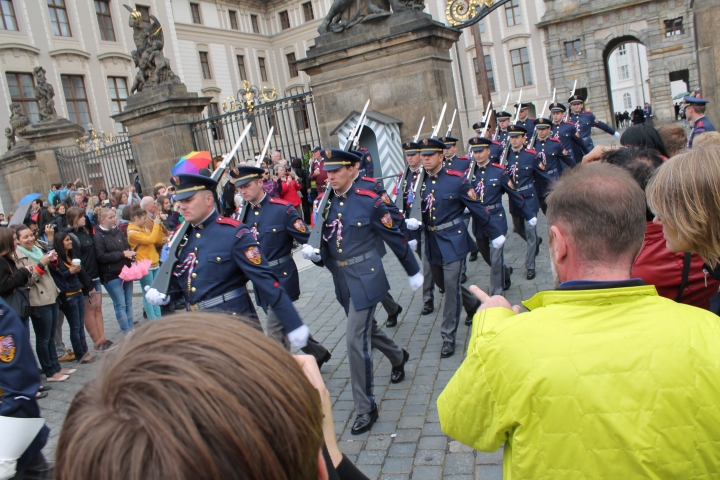 Prague Castle was crazy crowded, so we walked on through pretty quickly, enjoyed the views from the hilltop, and then headed for lunch!  Prague is known for its cheap food & beer, so we were stoked to find delicious, reasonably priced three-course meals everywhere we looked.  We finally chose the place we did because it had potato soup!  You all know that is one of my favorite foods in the universe!!

After lunch, we were hit with a downpour, but decided to keep exploring!  Not wanting to be in any pictures though looking like drowned rats, we zig-zagged our way around any and all streets that seemed interesting.  I made sure though to keep us headed toward “Dancing House,” a building by my favorite architect, Frank Gehry!

By the time we made it to Dancing House, which was a bit out of the way, we pulled a U-turn and walked along the river, back toward St. Charles Bridge. Once there, we wandered back into the Old Town Square before heading to our hotel to warm up and shower.  Then we were back out and about town, catching the sights of Prague at night!!  Soon enough though, too much time had passed, so we grabbed dinner on-the-go from a street vendor and headed to bed, determined to head out early the next day!