I’m sure you’ve been on the tips of your toes waiting for this post!  😉

I actually typed this over a week and a half ago during a meeting at work….but then never got around to emailing it to my personal email, which is on my Macbook, where all of the pictures are.  First world problems right here.

After just a short bit in tranquil Lucerne, Mom and I were off to one of Switzerland’s largest cities, Zurich, for a day!

My mom and I arrived in Zurich mid-morning and were happy to find a place to store our bags, given that our “hotel” that night would be another overnight train. (Dunt dunt dooo.)

We headed off down the main shopping boulevard, Bahnhofstrasse, window shopping, since everything was closed.  (Everything in Switzerland closes from ~6PM Saturday to ~9AM Monday.  When do these people do their grocery shopping?!  I always go Sunday’s!)  While the street had lots of fancy shops, I wouldn’t say that it was any fancier than the other big shopping boulevards we had seen.  I guess we were starting to get jaded? 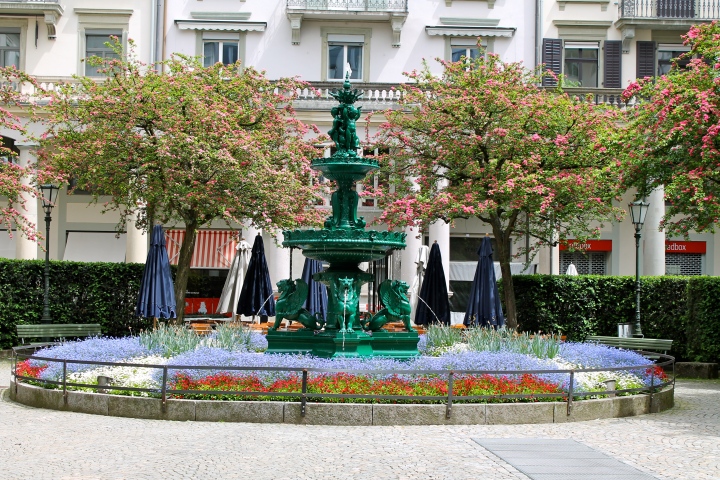 Pretty soon we found ourselves at the edge of Lake Zurich, having already walked the main part of the downtown city.  We took some pictures before heading across Quaibrucke and back up the other side of the city, back toward the train station.

Along the way, we came upon Grossmunster, a church with the absolute coolest windows ever!  As a former rock collector (yes, I know, I’m cool), I am obsessed with agates.  To see stained glass windows from agates!?  Now that was cool.  Especially after I had seen 20+ fabulous, world-famous churches at this point…that all sort of looked the same.  Grossmunster was different, and I liked it. 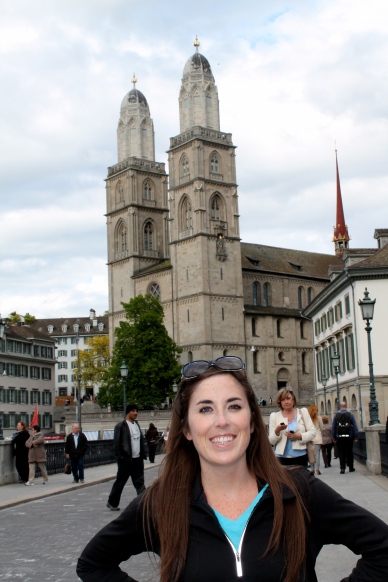 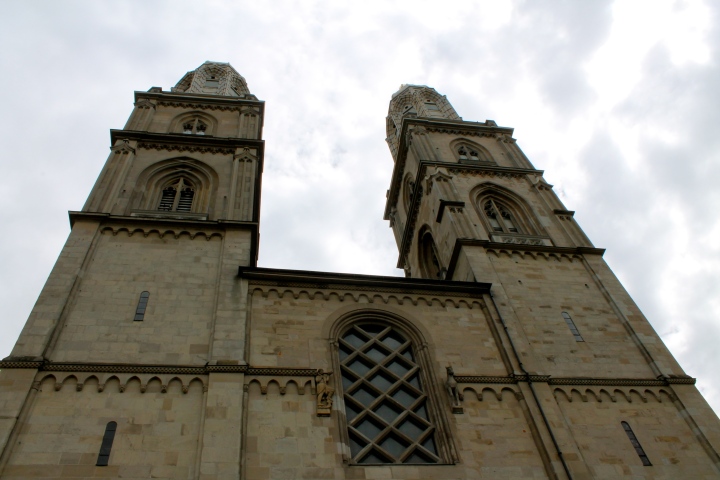 Once inside, the windows were even prettier!  I knew the second I saw one that I had found the perfect gift for my stepmom!  My dad and she have filled their house with unique shots of places they’ve travelled.  I feel like she enjoys taking pictures of “ordinary” sites (like the Notre Dame—real ordinary, right? 😉 ), from a different angle or viewpoint, that make visitors pause to ponder what awesome place they’re look at a photograph of.  It isn’t always immediately obvious.  So when I saw the windows—the most unique in all of Europe I’ve decided!—and noticed one in particular that shone with brown and orange undertones, I knew just what my gift to her would be: a canvas print of a picture I had taken of the windows.  I didn’t get it until about four weeks after we returned, but I think the wait was worth it.  It came out beautifully, and I think Cherie liked it.  Even if they hang it in a closet, I know they at least found it cool. 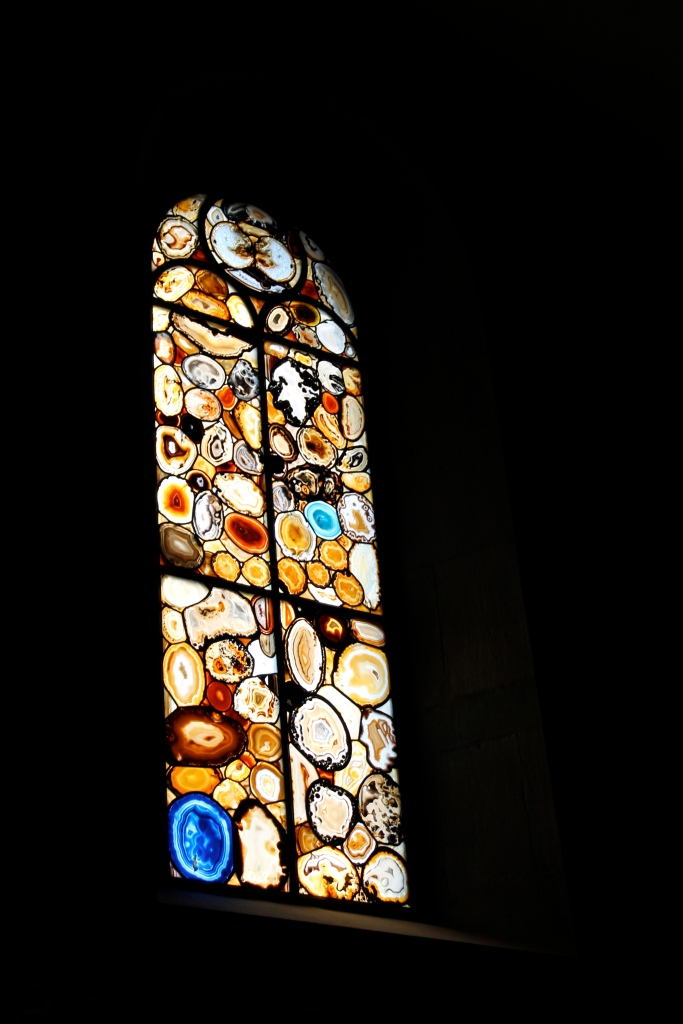 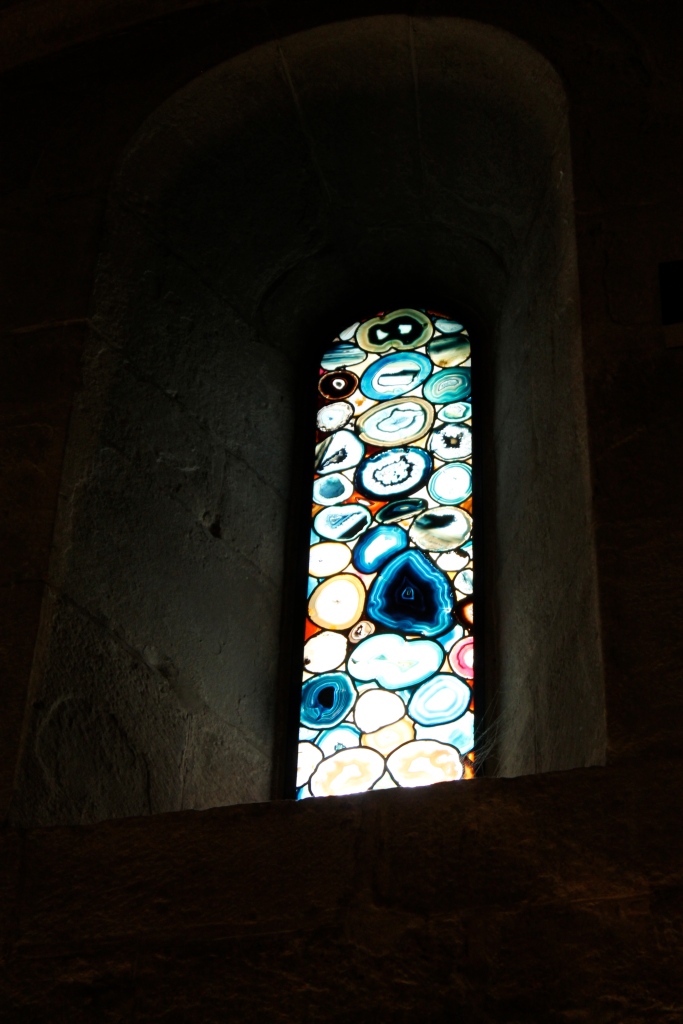 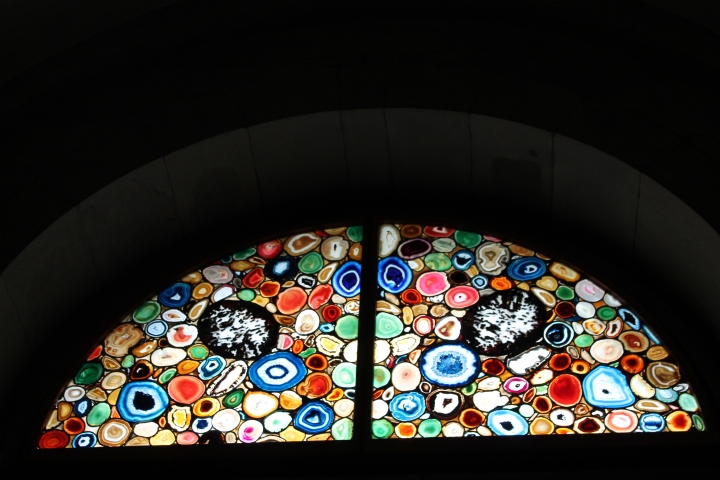 After viewing the church, we continued back toward the train station, checking out some museums. 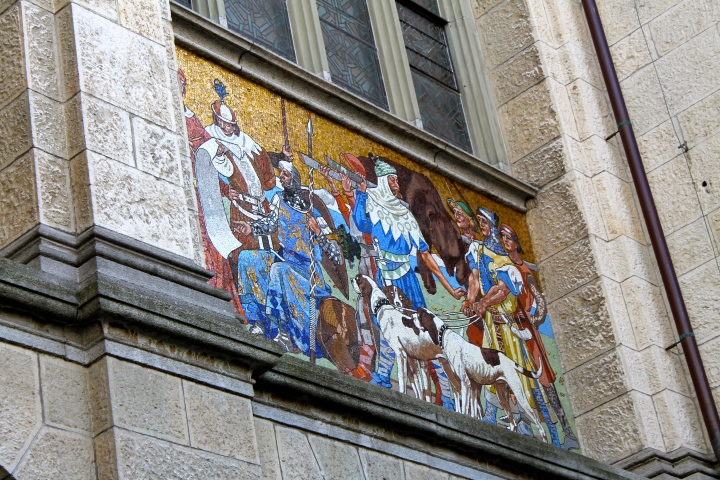 Then we decided to have “lunch” aka ice cream.  And what better ice cream in the world than Movenpick!?

I had Movenpick for the very first and only, but oh so memorable time, way back in 2005/2006 when I went to Europe with my dad, Derek, and Cherie.  When I came home from that trip, I had spent hours Google-ing ways that I could get Movenpick delivered to myself in the US, to no avail.  Even during my travels when I lived abroad, I still couldn’t find Movenpick anywhere, and I had almost come to believe that I was making up this delicious ice cream in my mind.  But nope!  Lo and behold, walking through the streets of Zurich we finally found it.

And then I did something illegal.  I waited patiently in line for my ice cream….and then was asked to wait patiently even longer for someone to come run my credit card for me.  (Apparently only one person in the restaurant knows how to run credit cards.)  So I waited and waited and waited….to the point that I had already finished my ice cream and was just standing….and finally gave up and walked away.  It was only 2Euro so it wasn’t like a felony-status robbery but come on—you can’t expect me to wait 20 minutes, right?  I only had one day in Zurich, and I didn’t want to spend it waiting to pay for my ice cream!

Oh and I had done something illegal earlier too, oops.  (At least I am confessing, right?)  We had been at the Tourist Information Center in the train station, where they had gift sets with four small magnets.  There were about four different varieties, including one that was four Swiss chocolate bar magnets, another that was four cuckoo clock magnets, another that was four Swiss dog magnets, etc.  I found the site I wanted—with four different variety magnets—but I, of course, really wanted a dog magnet too.  So I swapped out the least cute of the four magnets in my original set, and added in a dog magnet.

Alright, now that that’s off my shoulders….as we continued through Zurich wondering if I was going to get arrested for stealing my ice cream, we headed up to a park that overlooked the city and saw two really cute old men wearing noise-cancelling headphones as they played a game of chess on a life-sized board!  Then we headed back down the streets to Lake Zurich and all the way along the promenade to Zurich Horn.  This was one of my favorite parts of the day, as the promenade was jam packed with locals going about their business and the outdoor cafes buzzed with energy.  Everyone was biking or walking or jogging, and I enjoyed witnessing how active the city was.  Not to mention, the view was of the lake was gorgeous and the wide paths were surrounded by interesting sculptures and pristine landscaping.  By the end of our ~2 mile walk though, we noticed clouds beginning to roll in and headed back.  So ensued the giggle fits. 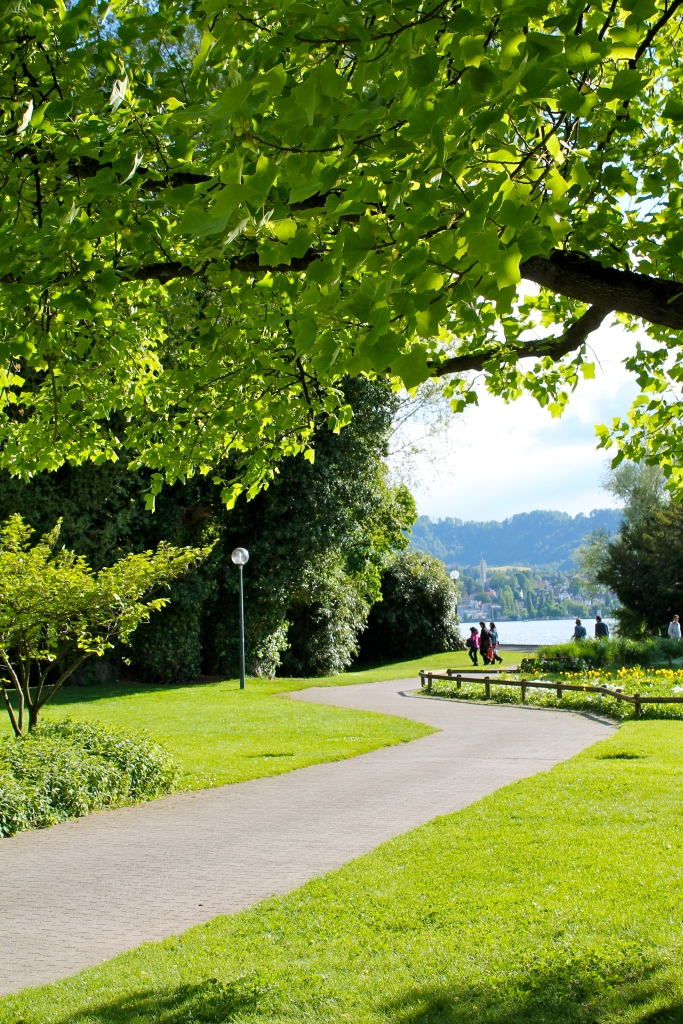 First, a mom with a baby seat on her bike and a small boy “biking” alongside her, rode past us and her cap fell off the back of her bike.  My mom and I pointed this out to her and when she looped back to pick her hat up, we noticed that her son wasn’t “biking” at all.  Instead, he was one some sort of bike-like contraption, minus the peddles.  While his tall mom peddled along with ease, this little boy literally had to basically run alongside her, resting only his little bum on the seat.  His teeny little legs had to go-go-go to keep up!  I have never in my life seen anything like it.  The calories that boy must burn!  I honestly think his mom is training him to be some sort of Olympic athlete!  Seriously!  While she gets to bike along the promenade leisurely, the little boy has to huff and puff his way, running to keep up with her!  My mom and I couldn’t stop laughing at the scene.  No one else seemed to notice or find it bizarre though—perhaps all moms in Zurich train their children in endurance bike-running?

At the train station, we headed first to the First Class Lounge for Swiss Rail riders.  I felt pretty baller!  After a few days of surviving Switzerland’s outrageous cost of living, it was a dream come true to find a luxurious lounge with free drinks!  I had about six glasses, alternating between hot chocolate & Sprite!  Hey!  I had to live it up.

Once the lounge closed at 9PM, we headed into the main hall of the station to scope out our dining options.  Eventually we settled on the restaurant that had the most normal (American)-sounding food.  (I’m not even trying to pretend we were cultured anymore haha.)  It was also the prettiest, with a gorgeous dining room ceiling!

I, of course, ordered the potato rosti, while my mom debated between the meatballs & asparagus or the “Grandma’s meatloaf.”  Our waiter recommended the meatloaf over the meatballs, so my mom went with that.  Twenty minutes later—during which I got to have a delicious side salad that came with my meal, mmm ruffage!—our meals came.  Grandma’s meatloaf in Zurich is apparently bulk Spam?

I have never seen anything like it.  The texture.  The color.  The serving size.  We honestly thought we must be on some version of Candid Camera, particularly when the waiter hung around for her reaction.

As my mom suffered through her one-pound portion, trying to politely make it look like she had eaten some of it, I couldn’t stop laughing.  Poor Mom, always getting the short end of the stick!  The waiter came by numerous times to quiz her about how much she was enjoying Granny’s meatloaf and while I had tears streaming down my face from laughing, my mom kept pulling the most polite, neutral face I’ve ever seen “Mmm yes, it is good. Verrrrry good.   Verrrry good sir.”  It reminded me exactly of a little kid lying through their teeth about whether they had been naughty or not: “Timmy did you make this mess?”  “Noooo, wasn’t me, wassssn’t meeee.”    She said it with such a serious, straight face, obviously trying to hold it together while I, on the other hand, could no longer control my hyperventilating and was laughing out loud the entire time!  The waiter even tried to persuade her to take her leftovers on the train with us and my mom had to put up quite the polite fight to turn him down!  I seriously think he was enjoying torturing her with this meatloaf specimen stuff.  I even tried a bit myself, but just absolutely couldn’t handle it.  While my mom left feeling sick from the meatloaf, at least we got our money’s worth in laughs? 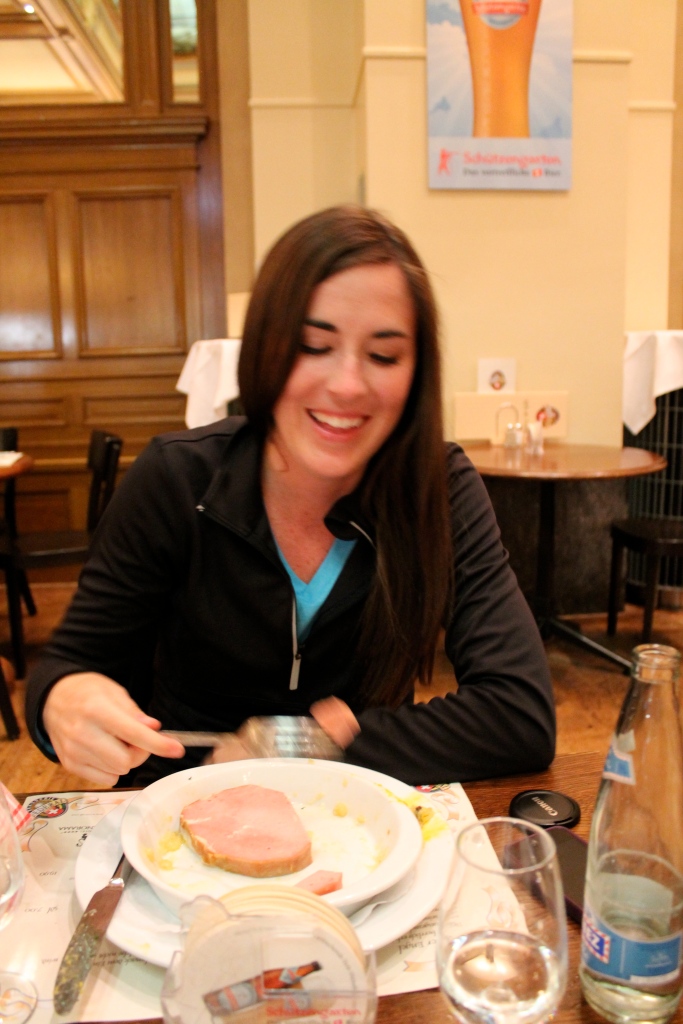 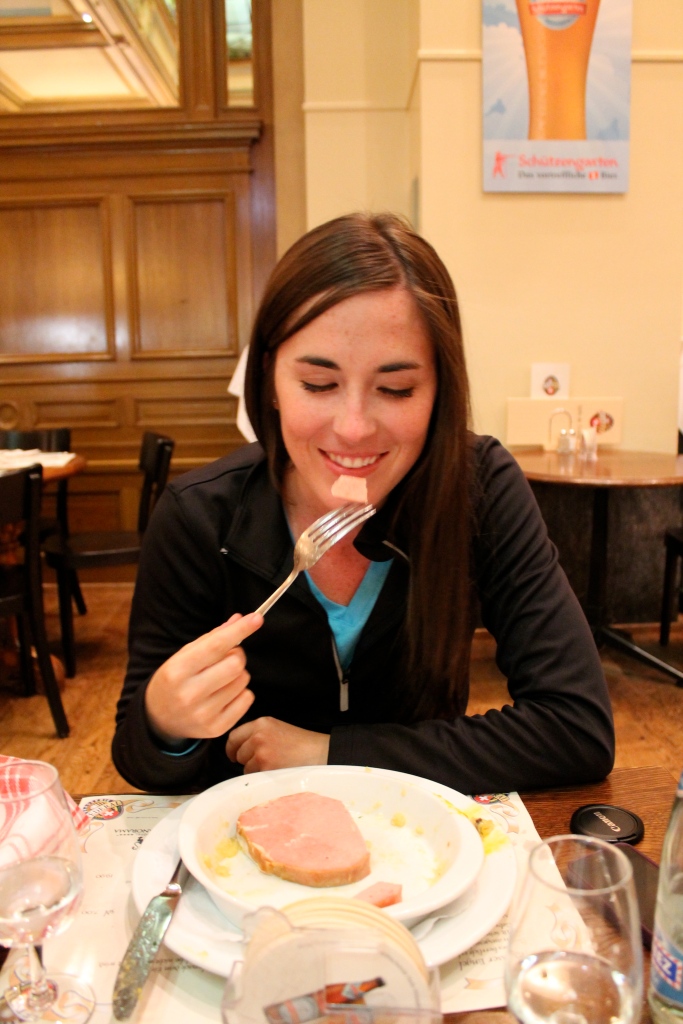 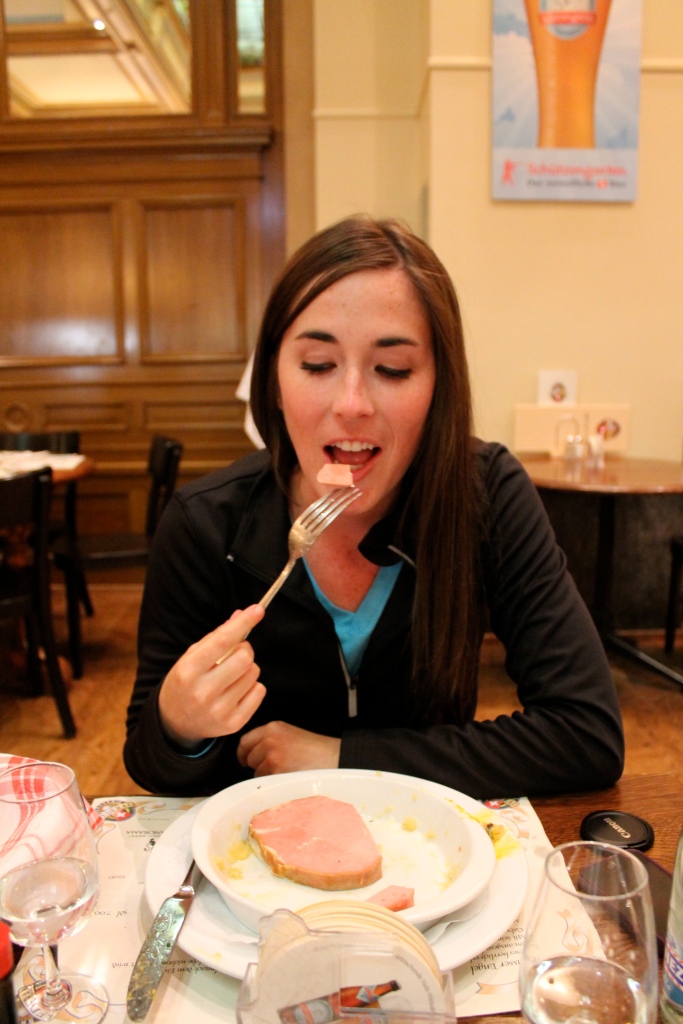 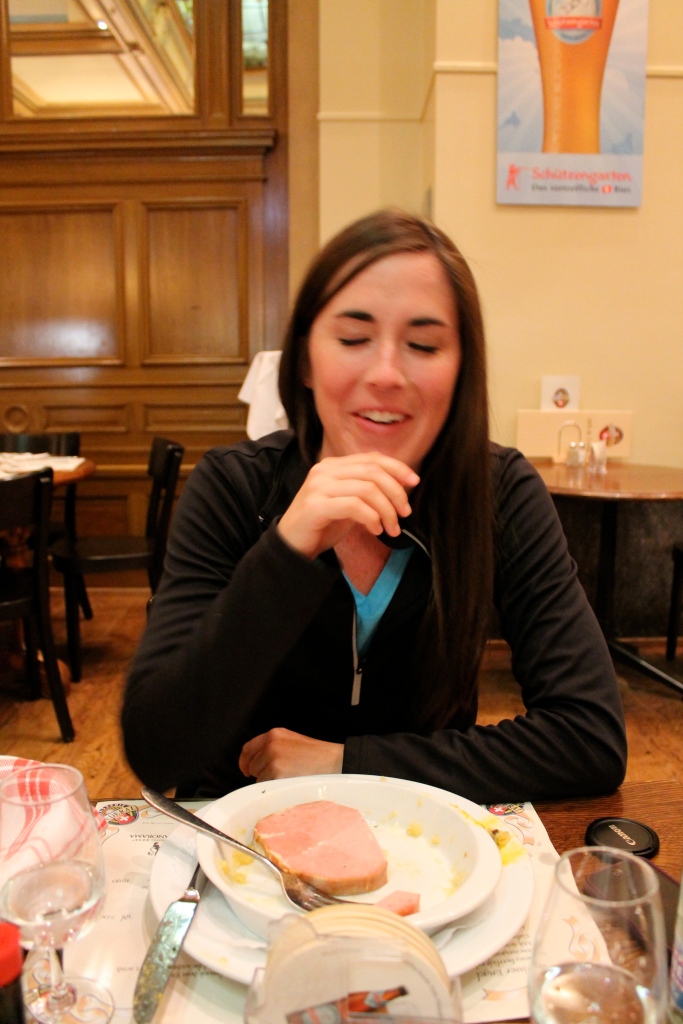 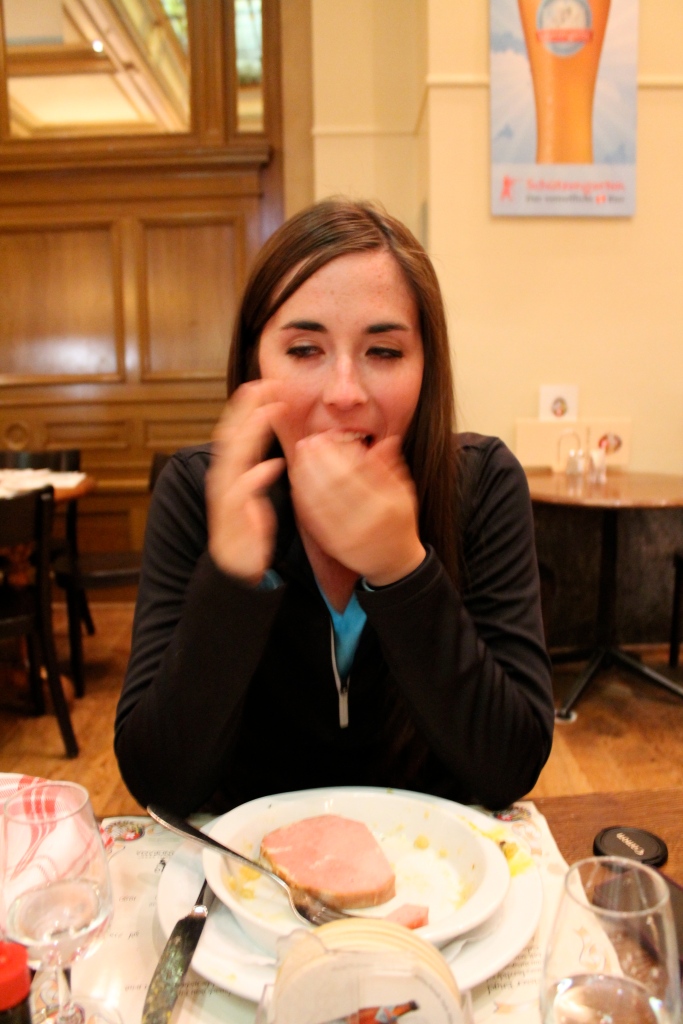 By the time we stopped laughing over the disgusting meatloaf, our overnight train had arrived!  We stepped on, excited for our first class two-person sleeping room……only to walk into the room and immediately hit a wall.  Like literally.  The room was maybeeee five feet long by three feet wide by six feet tall?  I paid $600 for this?  You have GOT. To. Be. Kidding. Me.   I was so annoyed that I couldn’t even bring myself to take a picture.  I had never seen anything so small in my life!  I would’ve rather just slept in a normal upright seat!  Ugh.  Whatever.

It took us quite a while to get situated since our two small carry-on suitcases, plus two bodies, barely fit in all at the same time.  (It resulted in my laying in my bed while my mom sat on her bed to brush her teeth & wash her face—oh, did I mention the sink in our compartment was broke?  I really should write Swiss Rail a letter—and then we switched places.)  Eventually though we both konked out, excited for Vienna!

I should mention that I konked out a bit more easily than my mom….whose stomach ached for quite a long while, as it struggled to digest the meatloaf hahahaha.