My mom claims I went from lying asleep to standing in .1 seconds.  I just remember running to the window, peering out, and seeing clear blue skies everywhere!!!!  It seemed like too great of a dream come true—I decided we had to chop chop and get to it!  We had to get up to the top of a peak in the Alps before the clouds came back!!

I ran downstairs to talk to Ursula about the plans.  Jungfrau, the tallest peak, of course had the only cloud in Swizerland hanging over it.  Schiltorn, a smaller peak that overlooks the three other largest peaks (Monch, Eiger, Jungfrau), was perfectly clear.  We could head to Jungfrau and hope that the cloud blocking the lookout point moved by the time we got there (3 hours later) or head to the top of Schilthorn and enjoy the view from there.

After a few minutes of being torn, I decided that I should just be thankful to see any the view from any peak, not adamant to see the tallest.   I handed over my credit card to buy the tickets to Schilthorn.

Our train didn’t depart for about an hour, so I shoveled down breakfast while rushing my mom along.  Rather be early and sit around bored for an hour than enjoy breakfast and be late!! 😉  We took the same train to Lauterbrunnen as before, but this time instead of walking toward Staubbach Falls, headed to the cable car to Grutschalp.  This first cable car wasn’t very scary; it was more fun!  I don’t think I had ever been on one before, so I was mainly curious.  My mom though wasn’t too happy about being squished up against the door as the cable car swayed, even though she had been on a cable car before (in Alaska I think?) and knew what to expect.

Even if I had been scared out of my mind, the cable car would have been 100% worth it though, for the stunning view I was able to capture—one of my absolute very favorite pictures from the trip!!

Once in Gruschalp, we hiked across the Alps a bit to Murren!  The walk was beautiful but, as always, I made my mom rush along.  We HAD to get to Schilthorn before any clouds started rolling in.  I told her we could stop and take pictures on the way back!

From Murren, we took a cable car to Birg, then transferred into another to take us to Schilthorn!  These two cable car journeys were much steeper than the first, but the view was once again outstanding!  I couldn’t have imagined anything cooler; I’m not sure I could find a view quite as cool, anywhere in the world.

I enjoyed watching the temperature drop, too, as we went through each stop of our 1.5 journey to the top of Switzerland.  We started in the mid-60’s and ended around 32 degrees at the top!

Stepping off the top, at Schilthorn, I was filled with anticipation!  Never one to wait, I bolted off to take pictures and left mom….well I don’t know where she was but I immediately went boom-boom-boom all around the Piz Gloria (the name of the restaurant/lookout area at the top of Schilthorn).  I was panicked that clouds would appear out of nowhere and ruin my view! 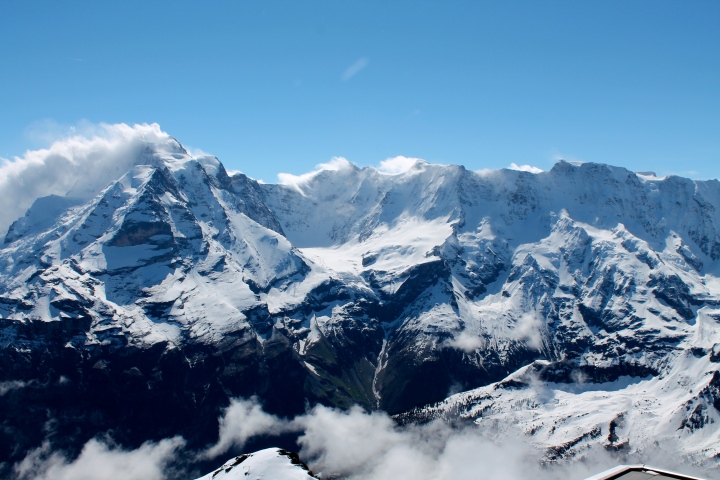 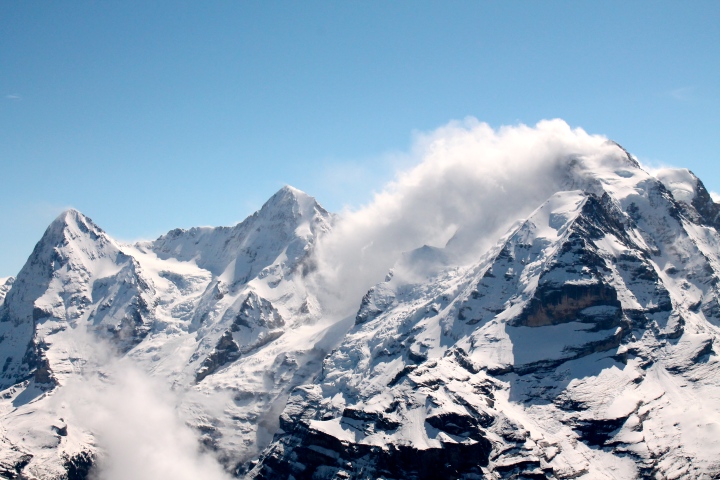 The pictures really do not even do it 5% justice.  Ugh!  I wish cameras could capture things exactly as I saw them.  Anyways…

Once I was sure I had captured enough angles, I reunited with my mom to talk about the view and take some pictures with us actually in them. 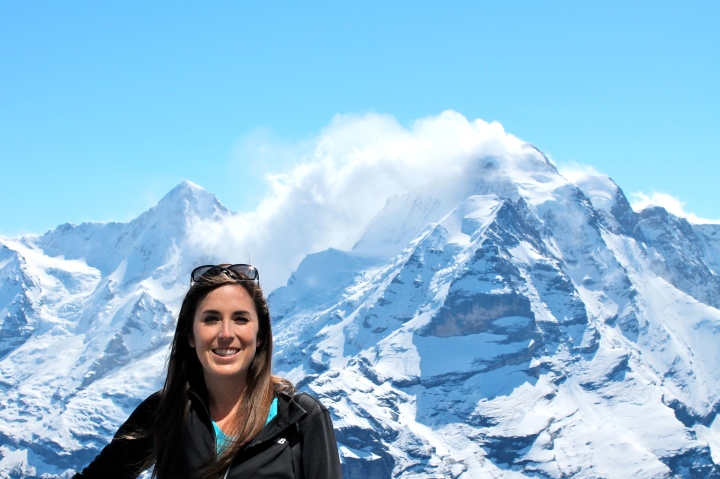 Besides being (literally) freezing (32 degrees), it was super windy at the top of Schilthorn.  (Duh, it’s 9800 ft high!)  We kept having to go inside the gift shop to warm up our hands, check to see if our heads were actually in the picture, and—of course—shop for gifts.  My mom got herself a shirt, and I got myself a shirt and a really cool “James Bond 007 Schilthorn” shot glass.  (If you aren’t familiar, Schilthorn is featured in the James Bond movie “On Her Majesty’s Secret Service” from 1969.)  You will hear about the shot glass’s tragic fate later on this novel….oops, I mean blog entry 🙂

During one of the times we were inside to warm up, a group of Swiss college students asked to interview me!  They are studying tourism and had a whole bunch of questions for me, ranging from my own history to my thoughts on Schilthorn to my thoughts on Switzerland to my thoughts on Europe as a whole!  It was fun.  I hope my interview was the most exciting.  I think I was the only young person who wasn’t a kid nearby, so I’m sure I at least seemed more energetic/spastic than their average middle aged tourist. (No offense, Mom!)

When we were half frozen, and I was confident that I had enough quality pictures (I decided later I should’ve taken more!), we headed back down the cable cars.  This time, walking from Murren to Grutschalp, I let my mom dilly daddle and take pictures.  While Schilthorn had awesome view of the Alps, the stops along the journey up did not disappoint either:

Finally back in Interlaken that afternoon, we grabbed our bags quickly from our B&B, said our good-byes to Ursula and her lovely black lab (who I have forgotten to mention earlier!!), and headed back to the train.

I really couldn’t have imagined a better day to summit the Alps.  The clouds stayed far away from me the whole time we were up there—despite weeks and weeks of clouds & rain, we were told by a couple who had been there three WEEKS waiting for it to clear up so they could go to Schilthorn.  I’d like to thank whoever up there decided I had enough good karma to blow away the clouds for me and make the stars align, so that I could enjoy my short visit in the Alps.  My mom and I were super fortunate.

As we headed out of Interlake, I snapped a few more pics, and then it was time for our next stop—Lucerne!  Oh and I also picked up a present for my grandma that I shamefully still have to mail.  I’ll have to remember to do that this week!