Oh boy oh boy!  We’ve made it to Switzerland!  This is the part of the trip that I have dreaded blogging about most because it was my very, very favorite—how on EARTH am I ever going to choose from my thousands of pictures those that I post on this blog!?

I have dreamed of going to Switzerland for a very long time and was devastated when I couldn’t make it there during my time in Manchester.  So when I first hatched the plan for this Europe Trip 2013, I knew that Switzerland was first on my list of places to go.  When planning the trip, it basically started with Switzerland in the middle, and destinations at the front and the back TBD.

We left Milan in the morning and had a bit of a rough time getting to Interlaken, our first stop.  Our train from Milan was supposed to be direct to Spiez, where we would take a short connecting train to Interlaken.  About an hour into the trip, our train stopped at what, we presumed, was the first stop.  Ten minutes at that stop later, the conductor comes by and tells us everyone has to get off.  Everyone!  “But this isn’t my stop!” I told her, only to find out that the train company had messed up somehow and the train needed to go somewhere else.  All passengers had to disembark.

So at 9AM, with rain still splattering us, my mom and I found ourselves chilling in Domodossola, Italy.  (At the time, we had no idea if we were in Italy or Switzerland or some other country.)  No one seemed to speak English and no one seemed to be able to clarify for us when the next train to Spiez (or the other destinations on the original train) would arrive.  Countless others were stuck in the same confused state as we were.  Finally, about 90 minutes after our abrupt train kick-off, a new train arrived and we got on.  Two train switches later, we finally made it to Interlaken!  Switzerland so far hadn’t been so impressive…

We found our quaint B&B right away and spoke with the lovely owner, Ursula, to plan our day.  An Interlaken local, she was filled with advice and things to do and sort of gave us two awesome plans for our day—head to Tremmelbach Falls (a great cloudy day activity) or head right to Jungfrau, hoping the clouds would clear up by the time we reached there.  (It is a 3hr journey to Jungfrau, Europe’s highest mountain.)

We decided to play it safe and go to see the waterfalls, which were located in Lauterbrunnen Valley.  I had already wanted to see Lauterbrunnen anyways, so this seemed like the best plan for us.  We decided to just keep our fingers crossed that against all odds it would be perfectly sunny the next day, allowing us to see Jungfrau then.

Off we headed across town, taking a historic sightseeing walk that Ursula had mapped out for us, on the way to the train station.  Interlaken was small, as expected, but pretty cute.  It was CRAZY expensive though!  My mom and I were so stoked to find tshirts on clearance for 10 Euro that we went ahead and bought them just an hour into the trip!  For lunch, we ate at a café I had read about online—Blueberries—that served healthy, inexpensive far.  My mom and I both reverted to our egg tendencies of France and ordered the quiche. 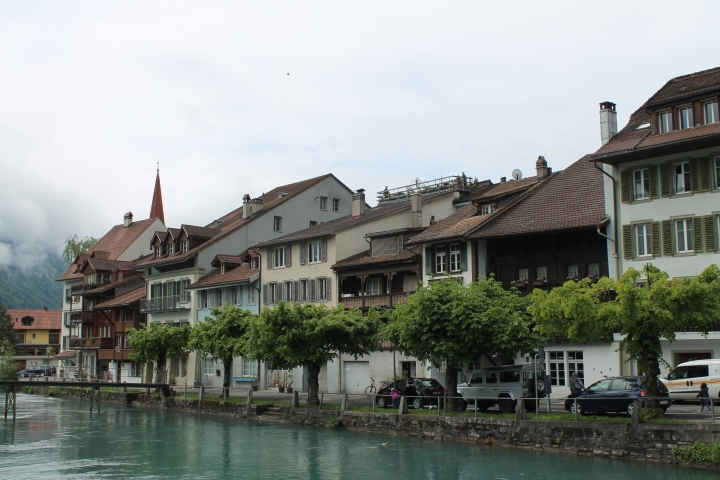 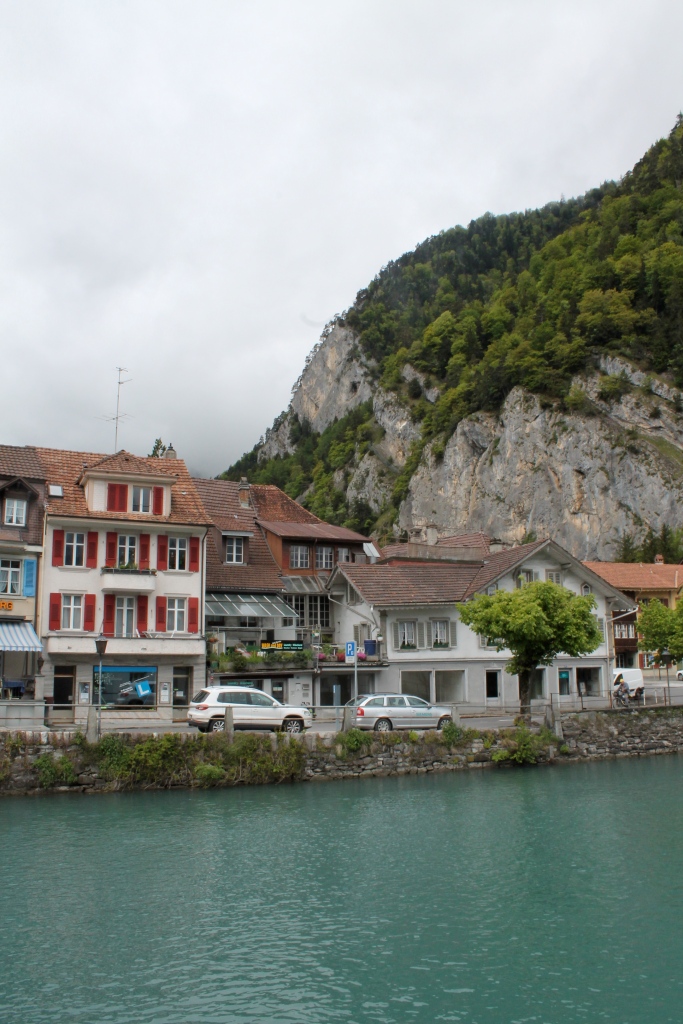 On the way to the train station, we saw a Hooters restaurant.  Ya gotta be kiddin’ me!!

The train ride to Lauterbrunnen was gorgeous!….or so I thought until each moment in the area surrounding Interlaken exceeded the standard set by the last.

Once in Lauterbrunnen, immediately outside of the train station, we saw Staubbach Falls, a 1000-ft waterfall landing right in the center of the city.  We walked through town toward the falls and then, realizing we had missed the bus stop to get to Tremmelbach, decided to keep walking through Lauterbrunnen Valley, to get to Tremmelbach on foot instead.  What a perfect decision that was!

Despite the clouds, hiking through the valley was stunning.  We past countless other waterfalls, small farms, cows and sheep with clanking cowbells, fields of wildflowers, and could see peaks rising even above the rainy fog!  My mom and I were so thrilled to be walking through the valley that we actually walked past Tremmelbach and all the way to the end, before realizing our lucky mistake and turning back.  Thanks to the mistake though, I’m pretty sure we saw every single one of the 72 waterfalls in the valley!

I personally was stoked on life to see waterfalls!  I had never seen one before!  My mom pointed out that when the snow melts in Winona, the water cascades down the hills in little waterfalls.  I don’t really know if I have ever seen this– at least more than a trickle– so I was delighted to see real life waterfalls! Ones over a thousand feet tall, tumbling straight off the ledges of the Alps into this random, perfect valley.  It was a very neat experience!

We arrived at Tremmelbach probably around 3PM and headed in the elevator-thingy to the very inside of the falls. Tremmelbach is the only place in Europe where people have access to waterfalls inside the mountain.  There are ten waterfalls!  It was very impressive!  And loud 🙂 My mom and I had fun peering down at the waterfalls and touching many of them, probably spending about an hour inside the mountains.  The engineering of the whole set up was mindboggling—they had the most perfect stairs leading all through the inside of the mountain, that fit in so naturally, as if they had been there all along.  It was a bit freaky too thinking about how powerful the waterfalls were and with one rock breaking, they could change direction and go wooshing through the tunnels for tourists!

After Tremmelbach, we began our hike back through Lauterbrunnen Valley.  By this time, it had gotten very sunny!  I sort of wanted to reverse and do the long hike again, to get better photos, but I think my mom was content with just walking the normal way back to the train station.

Along the way, we passed an Indian family taking pictures of each other.  I offered to help, remember my many times of traveling alone and trying to scope out the right, trustworthy picture to take a photo for me.  The family was so thrilled and I was able to capture two awesome photos just in time because their camera battery died right after I took it.  They were so thankful and happy!  It was nice to do something so simple, in the middle of a wildflower field surrounded by nothing, for a cute little family.  Soon after, we came across an older couple walking on the path, who stopped to tell me that they saw me take the picture and thought it was such a kind gesture.  It seriously wasn’t that big of a deal—almost second nature to ask if they wanted me to take one—but everyone seemed genuinely uplifted by the gesture.

We talked to the old man for a bit while his wife wandered up ahead on the trail (it reminded me of my Grandpa stopping to chit chat with everyone when he leave HyVee after his morning coffee, while my Grandma walks out to the car and waits patiently for her social butterfly to finish up!).  Toward the end of our chat, we mentioned that we were mother & daughter and he was startled—“OH!  I thought you guys were girlfriends!”  I am not sure if he means like friends that or girls or girls that are dating, but it was funny. 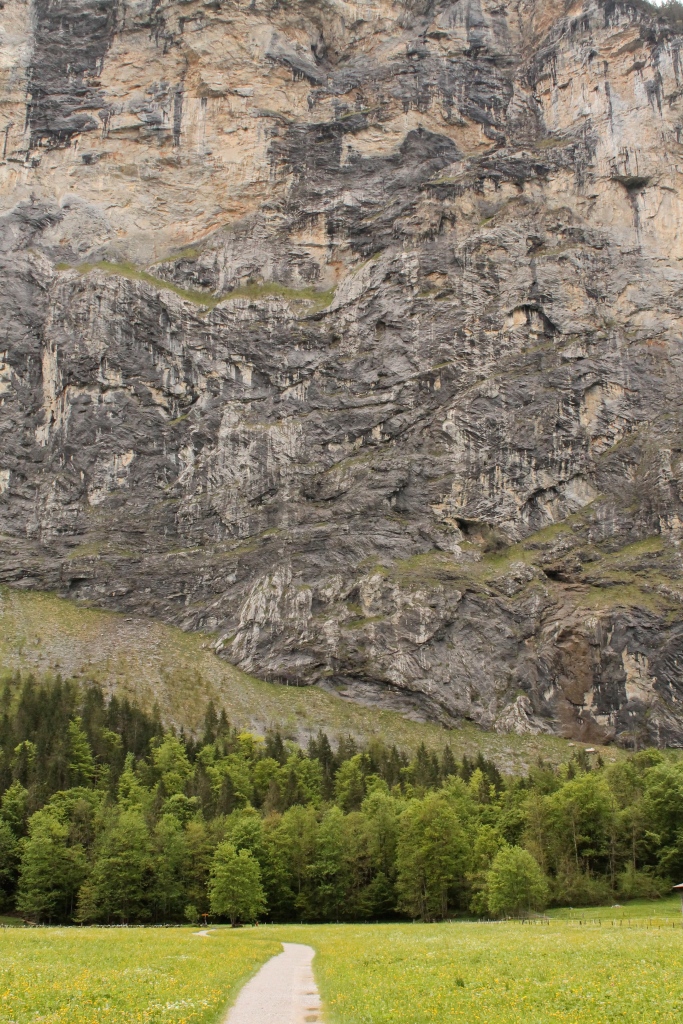 Finally back in Lauterbrunnen, my mom was starving.  (What’s new?  When I travel, I prefer to not eat or sleep or waste time; move move move! Things to do, places to go, sites to see!!)  I let her buy a cookie and then we rode the train back to Lauterbrunnen where we had our first—and sadly, probably best—authentic Swiss meal.  I had “Rosti,” a type of baked potato & cheese dish, while she had stroganoff.

Along the way to the restaurant, from the train station, we stopped in a “Made in Swiss”-type store, where I found some awesome hot sauce made nearby.  I remembered my stepmom saying how much she liked hot sauce when we had eaten together at Ncounter the weekend before, so I thought it would be the perfect souvenir for her!  However, the store was closing and I wasn’t positive that it was the best gift, so I held off on buying it.  I figured I would come back the next morning or find it again in Lucerne or Zurich—I mean, we still had two days left for shopping!  Unfortunately I did not find it again, and I had severe buyer’s remorse the whole rest of the trip.  Ugh!  Lesson learned 😦

After dinner, we stopped at a few more souvenir shops and bought chocolates (of course) for our family and friends, as well as at a grocery store for water and some strawberries for snacks the next day.  The cost of everything in Switzerland was so expensive, that we figured it was the easiest way to save a few bucks!

Back at our B&B, we checked the weather up until the very last minute to see what tomorrow’s forecast was….and it just kept getting worse and worse.  By 11PM when we turned off the lights, the forecast was 100% rain 😦  I was bummed that it meant trips up to any of the peaks wouldn’t be worth it—you wouldn’t be able to see anything more than five feet in front of you, Ursula had told us—but decided to just accept that things don’t always go as planned.  I would just have to come back to Switzerland another time for such an excursion!

I texted my dad and stepmom this update—I had planned to use my birthday money for a trip to Jungfrau (about $500 for my mom and i)—and went to bed disappointed, but looking forward still to the million other things that were still on my agenda….just no mountain peak for me 😦 …..