After our day in Portofino and our delicious meal in Genova, we woke up and headed for Milan!  After a quick train ride, we were checking into our hotel, and off to explore.

We were about a 15 minute walk from the Duomo, so we headed there first, noticing the opera and the gorgeous Galleria de Vittorio Emanuele II.  (I would definitely shop more often if my mall were as pretty as some of the arcades and stores we saw on the trip!)

Once at the Duomo, I was astounded by how many pigeons there were!  Soooo. Manyyyy. Pigeonssss!  I cannot stand pigeons.  They are ugly and annoying and scare me.  So I used my water bottle to whack my way through the pigeons for some cool pics, before heading inside with my mom. 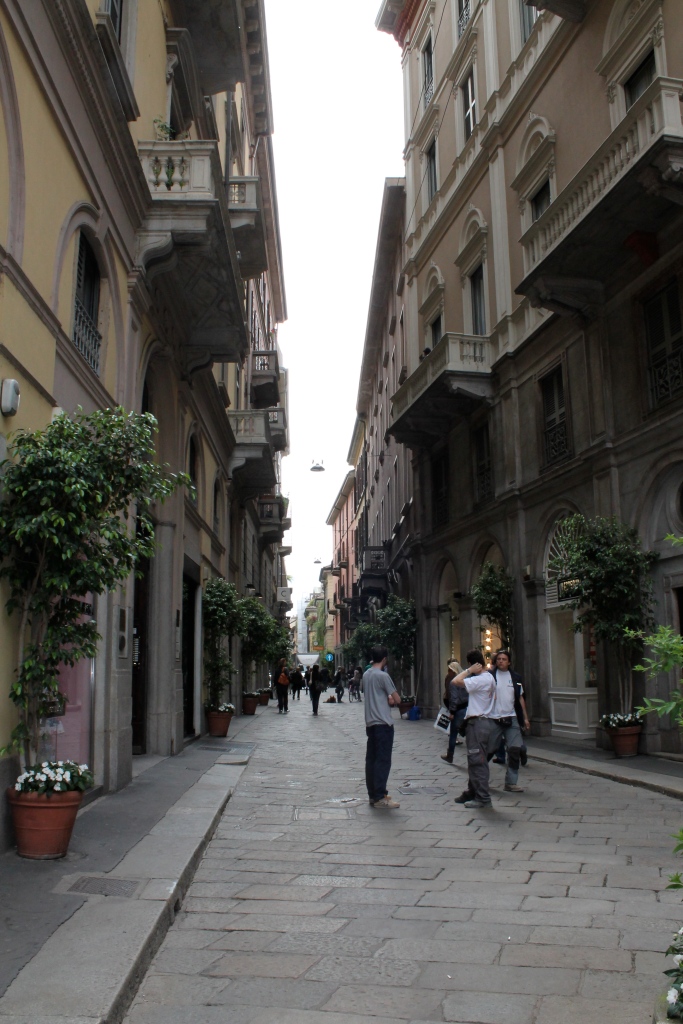 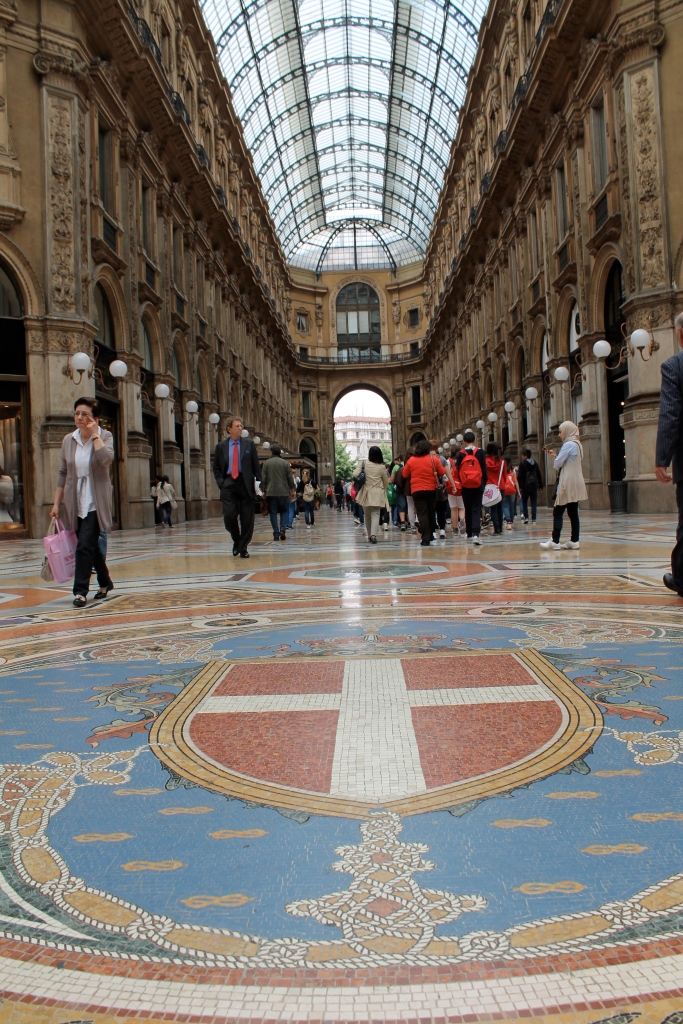 The pictures don’t really do the scale of the Duomo justice, so here’s one of me that we took later in the night, standing at the main doors.  You can imagine now how massive the Duomo is!

Inside, my mom and I both thought it was pretty, but also a bit spooky.  I think this was a combination of the stark white outside contrasting against the storm clouds moving in and then the eerily still and quiet inside.  It was definitely a site to behold!

Afterward, we headed to grab lunch right around the corner, at a place my friend Firas and his girlfriend, Elena had raved about: Luini’s.  The line was very long, so we waited a bit, before finally getting our pizza doughnut things!  (They’re like a calzone-type thing, but fried.)  I immediately thought it was yummy….but immediately imagined my cholesterol skyrocketing.  Definitely a treat, not an every day lunch item!

Munching on our pizza doughnut things, we headed off to see Castello Sforzesco.  I love castles!  And this one was more of a gigantic fortress.  It was cool to compare what was still standing versus the depictions from earlier centuries, when the fortress was at its heyday.

Throughout our time in Milan, my mom and I kept getting hassled by these African men selling friendship bracelets.  I am fairly good at ignoring them, but my mom sort of hassles them back.  While we were at the Castello, one dude asked my mom if she had a husband and if she would marry him.  My mom replied that she had lots of husbands, and he wanted to know if she a black one.  She basically listed back the rainbow of colors in husbands, he started laughing, and then they stopped hussling us.  Victory!

Around the same time as this encounter, it started to sprinkle.  Not to be deterred, my mom and I continued on.  I wanted to see the church where “The Last Supper” is and also check out the Navigli District, with its canals.  I had planned an afternoon ice cream stop too, based on a place Firas and Elena had also recommended. 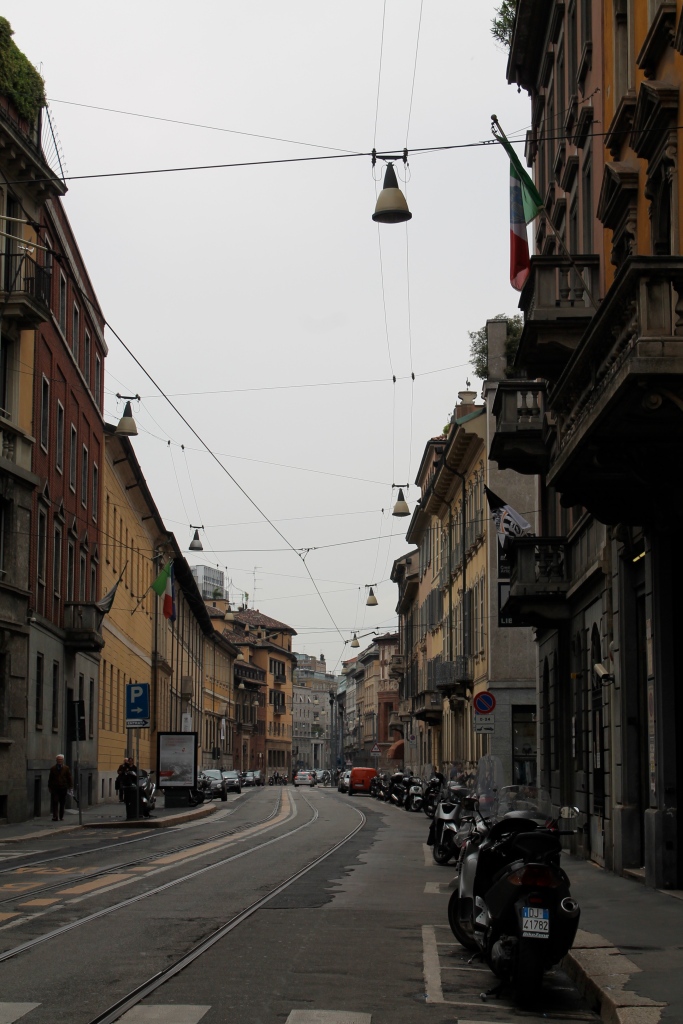 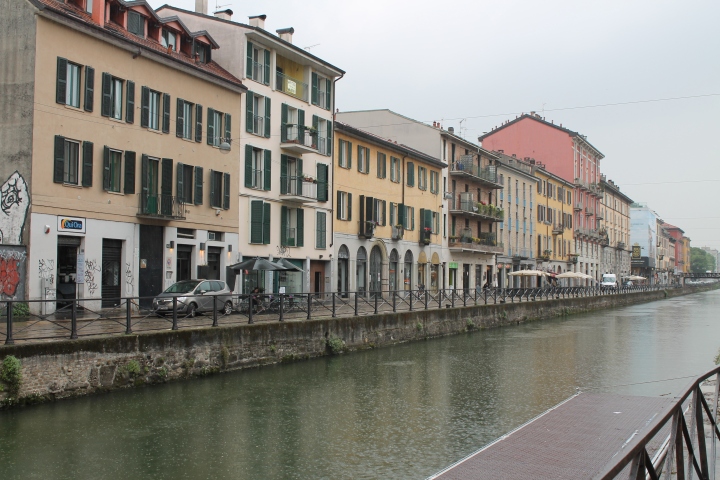 When we were leaving Navigli, it started to pour.  Literally monsoon status pour.  Of course my mom and I didn’t have an umbrella, and I was wearing what I fondly call my “Jesus sandals,” which have no grip on the bottom of the shoe and no grip on the top of the shoe.  So basically, as I walked, my foot kept sliding off of my shoe, while my shoe kept sliding on the ground, making me sort of have to prance/slide/slip/fall all over the place, laughing—of course, as we made our way for cover.  We figured the storm would soon pass—like a monsoon, right?!—but nope.  It just kept raining and raining and raining, as I made my mom walk along the road.

Finally, an old man taking pity on our condition (one of my shoes was basically broken off at this point), directed us to the nearest tram stop.  We stood huddled in the pouring rain for about ten minutes, almost giving up on the ice cream idea, before getting on the tram.

On the tram, my slipping and sliding problems continued and without room for a seat, I slide all around the aisle, almost falling on a young man’s lap a few times.  He was cool about it though and laughing.

With really no idea where the tram was going, only that it was headed toward the main train station, I kept my eyes peeled looking for familiar sounding street signs.  Finally I saw one that reminded me of the ice cream place so I made my mom get off.  Lo and behold, with my fingers crossed that I was right, we turned our first corner and saw the ice cream store!  I was so happy!  My mom I think was too, after such an epic journey for one cone.

Since it was still raining (literally, it was a never ending downpour), my mom and I sought cover in some nearby stores and did some shopping.

Then we hopped back on a tram and back to the comfort of our hotel J  Once again, I was quite skilled at using my keen sense of direction and the surroundings to determine when we should get off, despite never having before been at that tram stop.  I just could tell it was close to our hotel!  And it was, just a block away.

After cleaning (warming) up, we headed out to dinner at yet another place Firas & Elena had recommended, Santa Lucia.  My mom tried the famous “cotoletta Milanese,” while I went for pasta in a tomato sauce, and we enjoyed some wine and bruschetta again, too.  Our waiter and the manager-type person of the restaurant quite liked us.  They wanted to take a picture of us before we left haha.

Following dinner, we strolled around a bit more and hung out near the Duomo.  Then it was back to the hotel to get a good night’s rest and say a prayer too that it was more sunny the next day! 🙂