This past Monday, I had my friend Mark Marsillo over for dinner, for his birthday!  He was my first dinner guest, since my proper kitchen table arrived!  It was very fitting that he was first, since Mark was who had helped me (in a pinch) get my barstools (and coffee table) all settled in my apartment, way back in July.  In fact, he picked out the barstools he was sitting on!  (I had liked a different style initially, but he helped me realize the ones I bought– that he recommended– would be a better fit.)

For those of you that don’t know, Mark is one of my greatest role models!  He has been a huge part of my life since I was about 13, so a solid decade now.  I look up to him professionally for all that he has accomplished, and also I look up to him personally, for the gusto he lives his life with.  He is one of the greatest friends anyone could ever have.  I am very thankful to have him in my life!  I know I could count on him for anything; whenever my car breaks or my battery dies, he’s usually the first person I call.  And I know I can go to him for any sort of advice; he’s always able to talk sense into me, even when my parents can’t!  It is always a real treat to see him!  Each time we get together, I always leave feeling energized and wishing we got together more often.

For some reason, despite knowing Mark is 100% italian and his mom makes homemade pasta & sauces & delish food all of the time…..when I was deciding what to make, I really wanted to make meatballs.  So what did I make?  (Knowing full well that it would pale in comparison to his mom’s food haha.)  Mozzarella-stuffed meatballs & spaghetti!  With Yonanas! for dessert.

I found the recipe on “The Lean Green Bean,” which is one of my favorite blogs.  So it is somewhat healthy!  You can find it here.

Normally I don’t follow recipes totally, but this time I followed it to a “T” with two exceptions– I had ADD at the grocery store & bought bay leaves instead of basil on accident so I sipped that, and then I cooked them for like 45 minutes instead of 20 because I didn’t want to give him food poisoning.

I even got all professional & chopped an onion (in the previously unopened chopper my mom gave me 2+ years ago), then sauteed it with garlic.  Proof:

I was also very nervous to have to touch nasty, raw, ground chicken– to form the meatballs– but I survived.  In fact, it sort of felt like I was playing with play-doh….so it wasn’t too bad. 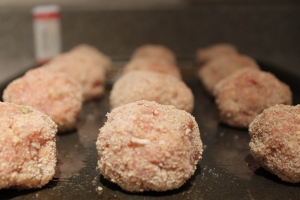 They came out perfectly! 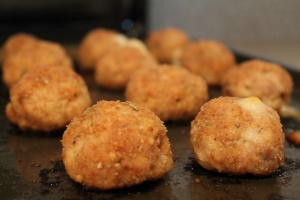 And once they were placed on top of the spaghetti (I bought the most expensive noodles so that they had a better chance of competing with Mark’s mom’s homemade noodles), they made for a delicious meal!

Mark said the seasonings in the meatballs were great!  I think he was impressed with my culinary abilities.  He ate all of his spaghetti but then, of course, left room for his delicious dessert….YONANAS!

Mark was the very first person that has ever tried ice cream from my YONANAS machine besides me!  He, too, was mind boggled by the fact that you can shove frozen bananas & strawberries into this machine….and then POOF! Out comes ice cream.  It’s crazy!

I made some funny testimonial videos of Mark eating the yonanas & enjoying the ice cream, in case I ever need evidence in front of my friends that Yonanas is the most legit kitchen device ever.

Now I hope you all go enjoy a yummy dinner yourselves!  I’m enjoying leftovers from this 🙂