I had other things that I had planned to blog about today, but I am still just too excited about Guinness’s racing debut to put off posting about it!  (So excited in fact, that I am honestly having daydreams of turning him into a professional racing dog.)

At 8:30PM on Saturday night, Derek dropped Guinness off.  I watched “Argo,” while Guinness sat on the opposite side of the couch whining like he had just been dropped off at a complete stranger’s house. 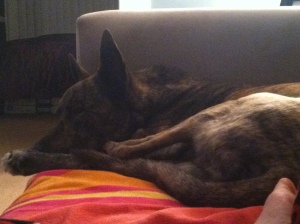 At 11PM, we went to bed.  He finally realized he was stuck with me (muahaha) and stopped whining.

At 6AM, I shook his snoozing self awake.  “Guinness, we have a very big day today!  I need you to go drink some water so that you’re hydrated, okay?”  As I chugged a water bottle, he just whined at me, waiting for breakfast treats. 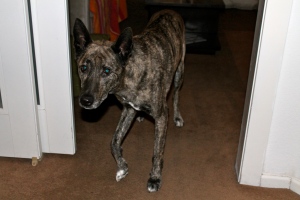 At 6:30AM, we departed for Tempe Town Lake Beach Park.  We faced gale-force winds, sub-50-degree temperatures, and approximately 100 menacing trees that were just begging to be peed on.  (Fortunately, I had planned for Guinness’s constant need to pee on everything, so we weren’t running too late.)  About a mile into the walk, Guinness’s ears finally perked up at the sound of something other than a bird in the water that he wanted to eat– music.  “What could that be, Guinness!?  Is that maybe your surprise!?” He picked up the pace.

Right at 7AM on the dot, we walked under the Mill Avenue bridge and into the Petco 5K9 block party.  Dogs everywhere!  Humans everywhere!  Music playing!  Treats galore!  Fake fire hydrants to pee on!  Guinness was close to having a heart attack.  “Surprise little buddy!  This is your big surprise for the day!  We’re going to run a race with other doggies!”

We headed quickly to the other side of the shenanigans to registration to pick up our race number, t-shirt, and swag bag, hoping to get through that before everything got too packed with dogs.  Just as I got to the front of my line and had my pins & number in hand, what do I hear behind me?  Guinness attempting to attack a huge golden retriever.  He was snarling and reared up on two legs, trying to yank me & the leash.  “Guinness, no!!”  My worst fear about the whole day was that Guinness would not get along with the other dogs.  Uh oh…

After that first feisty encounter, Guinness was on high-alert.  He was looking left & right suspiciously, crouching around, and seemed way over stimulated.  He felt like trying to fight every fourth dog, preferably ones twice his size.  So I took him outside of all of the booths & stuff to sit by the lake, in a quiet dog & human-free zone.  He still kept panting (a sign of stress) and barking non-stop, not matter how many times I told him he needed to behave like a good boy.  Eventually he attracted the attention of the announcer guys, who each put down their microphone for a bit to come hang out with Guinness.  They both commented on how beautiful he was & wanted to know what he was.  One said he for sure had German Shepherd in him; the other said he was sure he had greyhound in him.

Then the first said something that made me laugh out loud– “This guy looks like he could be the winner today.” He was the first of three people that told me that today!

Ummmm no.  Don’t let his looks fool you!  Guinness is an indoor dog whose only form of exercise is like two minute pee breaks twice per day.  The few times I have taken him running, he is the hare, not the tortoise.  He sprints for a solid half mile, then jogs for a quarter mile, then slowly meanders the remaining way.  I was predicting less of a stellar finish and more of a solid first mile, followed by me begging him to keep moving for the last two.  I thought it was going to be funny to have to coax him to the finish line.
While Guinness continued to try and attack every dog & barked more than I have heard him bark in his entire six years, I became concerned that he was too naughty to be allowed to run.  “Guinness, racing today is a privilege.  It is a fun event, like going to Disney World is for kids.  If you keep being naughty we are going to go right home & you are going to lose your balcony privileges for the rest of the day, and you’re going to have to spend all day with no TV or music and I may not even talk to you.  Pull.  It.  Together.”  He still didn’t.
Then our knight in shining armor came– my mom!  While Guinness acts like he doesn’t know me & never listens to me, he pulled himself together & got his attitude corrected almost the moment he saw big bad Mom.  He stopped barking, started getting along with the other dogs, and waited patiently, but eagerly at the starting line.  (We did choose to stay way in the back with the walkers, in case he thought he was macho dog again.)

Then we were off– GAME TIME.
Guinness was out like a bandit!  We were going so fast that we had to go about ten feet off course to run up & down the grassy hills, in order to pass people on the flat sidealk at the pace we wanted too.  He had his ears smartly pulled back– to increase his aerodynamics :)– and was taking strides bigger than I’ve ever seen!  I had my arm stretched out straight in front of me as I did my own “strides,” strides being the cross-country training drill where you run as fast as you can without clenching your muscles.  One misstep and I feel confident he would have dragged me along.  In fact, my arm and upper back muscles are sore today from holding so tight to that darn leash!
At the one mile mark, we turned right to cross over the Priest Drive bridge and were jammed in the little sidewalk pretty tightly with the other racers.  Guinness had a little snarly with a stupid little white fluffy dog & the owner yelled at me to keep him on a tighter leash but um, hello, I could have had him attached to me or leashless and he still would have been running the race at the same pace, doing the same things, because he was flat out owning this.  He was a beast!
Around 1.5M was the first water break.  I slowed down to see if Guinness wanted any, but it was like he had blinders– ZOOM passed the water he went!  I seriously at this point was getting concerned he might have a heart attack.  I mean, this dog has never jogged more than a half mile before, and here he is busting his tail off, passing dogs left and right.  His tongue was hanging out so far!  But still, he kept chugging.
At 2M, he noticed the water and pulled over for a quick drink break.  Four seconds in though, he noticed the white husky who we had passed a minute before, go by on the course.  “Oh hell no!” he thought and literally shoved the bowl with his foot out of the way and took off running!  No time for manners or four inch detours around water bowls!  At this point, I lost my grip on the leash because I was stunned by how competitive he kept getting by the second.
“Good luck catching that guy,” said the two racers on the course.  Cool.
Fifteen scary seconds of sprinting as fast as I could, I finally had him by the leash again.  Guinness didn’t even notice he had left me in his dust, he was flying so fast!
Right before 2.5M, Guinness got real competitive.  Any time a dog started coming up over his shoulder, trying to pass us, he turned around and snarled at them!  “Guinness Russell!  You be a good sport!”  Whatever.  It kept everyone from passing us!
At 2.75M, we had an uphill.  His pace slowed a bit, but I reminded him to dig deep & use his little glutes, and he pushed through!  We rounded the corner to cross south over the Mill Avenue bridge, passing some cops on the way.  “My dad is going to be a cop!” Guinness said.
Crossing Mill Ave, Guinness’s pace was considerably slower, but I’m pretty sure it was because the next dog was quite a bit in front of us.  He no longer had anyone to catch!  He kept nervously glancing over his shoulder though, to make sure no one was sneaking up on him.  I had to remind him, “Keep your eyes on the finish, Guinn!  Don’t worry about the other dogs, just focus on getting to the finish!”  I kept telling him to keep it up and focus, while also thinking how grateful I was there was a vet at the end because I was pretty sure he might soon die.
At 3M, we rounded the corner off of Mill Ave bridge & headed into the beach park, toward the balloon arch finish.  I spotted my mom in the distance, but Guinness was once again overwhelmed by all of the excitement.  I had to coax him a long a bit, but my mom’s says we were still going super fast!
We crossed the finish line at 27:18.  Guinness could have still kept running.
I wasn’t sure if I was going to tell people or not, but right in the moment we crossed, the finish, I got teary eyed.  I was so proud of my little guy and overwhelmed by how well we had done!  I was so worried initially that a 5K would be too much for his untrained legs; then before the race, when he was nervous, I was so worried he wouldn’t get along well enough with everyone else to run.  He was an absolute champ!  I was blown away by his race.  He was the Guinness I know and love!  He took off running and never stopped.   No time for water or distractions or peeing on bushes!  Just time to get the job done.
Afterward, we went for water.  Guinness didn’t even drink that much because he was too distracted & busy barking to all of the other dogs, talking smack to them about how he beat them, probably.

We also indulged in lots of treats. 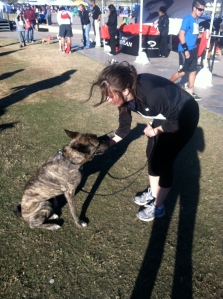 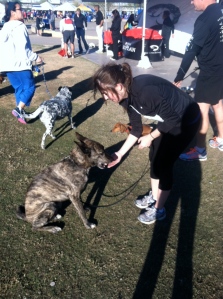 I kept reminding him how well he did & pointing out what dogs he beat. 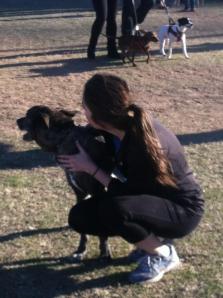 Then we went home. 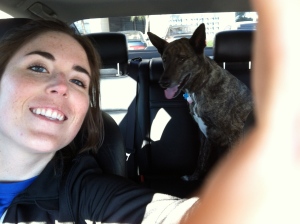 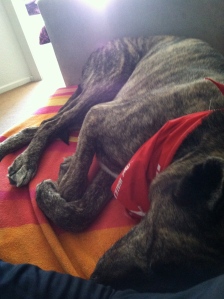 After the nap, likely due to his ADD, Guinness woke up & seemed to forget about the race (despite his finisher’s bandana) and could only seem to remember he was stuck at my place.
He literally acts like hanging out with me is the equivalent of staying at an abusive foster home.  No matter how many walks or runs we talk to explore…how many treats he gets…how many body massages & belly rubs….how much furniture he can claim as his own….how much time he gets to spend on the balcony….he whines, whines, whines.  Plus he doesn’t listen to a word I say.
“Guinness, come cuddle with me on the couch.”  “Ew no, why would I do that.  I don’t like you.  I want Derek or Mom!  I’m sitting over here. You better stay over there, don’t come near me.” 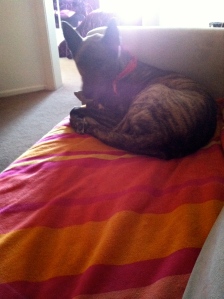 Sigh.  Someday Guinness will love me like I love him!  Someday….(if my mom hadn’t forgotten to send him back to Tucson with his swag bag, maybe that day could come sooner grr.)

Anyways, it was an awesome end to the weekend, and I plan to do the Petco 5K9 with Guinness every year!  I am also trying to find some other dog-friendly races for us since he seemed to really have a good time being competitive.  Plus we get cool shirts 🙂 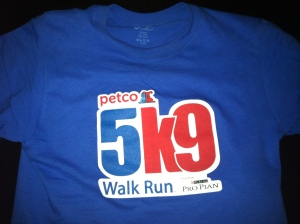 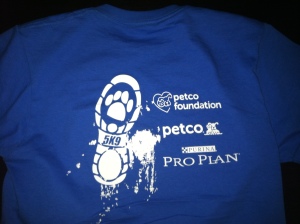